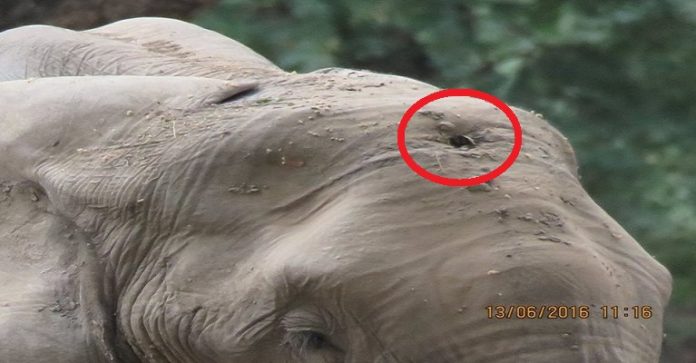 “He came 5 centimeters close to death. He was lucky.”
It’s easy to get caught up in the gloom and doom of modern life, but there are good people that exist on the planet who are doing their best to offset the negativity.

Luckily, an elephant that was shot in the forehead, most likely by poachers, seemed to understand this when he approached humans for help.

The Dodo relays that an elephant named Pretty Boy survived for weeks after being shot in the forehead. It was after veterinarians from the Animal and Wildlife Area Research and Rehabilitation Trust (AWARE) heard that the handsome elephant as injured that they rushed to Mana Pools National Park.

Enticing Pretty Boy to receive the help he needed was easy. Apparently, he walked right up to the humans.

“He made himself available for examination within half an hour, coming right up to their car.”

“An extremely gentle and relaxed bull, the vets managed to get a good look at what immediately became apparent was a hole going into his forehead,” the post reads.

The activists quickly got to work. Pretty Boy was tranquillized then taken in for an X-ray, which revealed that a deformed bullet was inside of his head.

When Dr. Lisa Marabini, director of AWARE, was asked to disclose more on the topic, she said:

“Bullets are usually sterile when they penetrate tissue as they generate so much heat, so if they don’t hit a vital structure they can often be left.”

Reportedly, the elephant was hit too high for a “kill shot.” Instead, the bullet glanced off his skull and caused a fracture in the bones of his sinuses. But wandering around for weeks didn’t help heal the condition, for the head wound was infected.

“It was essential to remove the dead pieces of bone so that the body could continue to heal the infection,” Marabini said.

Whoever shot at the beautiful elephant was clearly trying to kill him. According to the vets, an abscess was found on his shoulder where another bullet hit him. Fortunately, they were poorly trained.

“We think he was shot outside the park and came into the park for refuge. Whether it was a poacher or a hunt gone wrong, we can only speculate.”

While the incident itself is horrible, it is remarkable how trusting and gentle Pretty Boy was toward the humans who clearly wanted to help him.

“I never usually feel totally comfortable getting very close to a wild elephant,” she said. “But he literally emanated serenity. There were no aggressive vibes coming from him whatsoever.”

The vets cleaned out the elephant’s head wound then gave him antibiotics and parasiticides. Once awake, he napped against a tree.

It will be a while until Pretty Boy is fully healed, but he is, at least, on the path to wellness once again.

“He came 5 centimeters close to death. He was lucky.”

Please share this article to raise awareness about the African elephants’ plight. It is estimated that within 10 years, the species will go extinct. Don’t let that happen – raise a voice against poaching and share news like this to encourage others to get involved.

If you’re interested in helping the organization save more lives, please visit this link and contribute.

This article (Elephant Who Was Shot In Forehead Approaches Humans For Help) is free and open source. You have permission to republish this article under a Creative Commons license with attribution to the author and TrueActivist.com