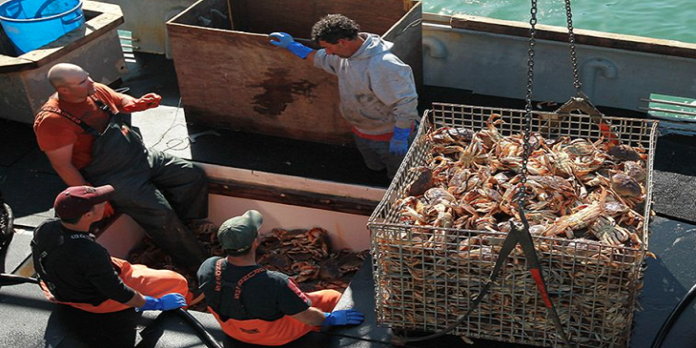 California State Officials try to cover up the real reason behind the banning of commercial crab fishing.

Just a few months ago, back in November of last year, the entire state of California placed an indefinite ban on crab fishing, ultimately putting their entire commercial crab season on hold in the process due to what state officials claim as ”dangerously high levels of algal toxins in the bodies of the crabs.”

“Crab is an important part of California’s culture and economy, and I did not make this decision lightly,” Charlton H. Bonham, the fish and wildlife agency director, said in a statement. “But doing everything we can to limit the risk to public health has to take precedence.”

Reportedly, they are placing the ban to protect the health of their people, but unfortunately, it turns out that the explanation that the state gave isn’t really the truth after news broke out that in fact, the ban was passed because of the radioactivity stemming from the 2011 Fukushima Nuclear Disaster and what they were really trying to protect was the “health,” so to speak, of the California seafood industry.

Ever since a massive earthquake shook up the Fukushima Daiichi nuclear plant in Japan that led to the power station’s multiple meltdowns, huge amounts of contaminated and radioactive materials made their way into the ocean and eventually, into North America’s west coast.

California state officials are concerned that if people learned that marine life in their area could be damaged beyond repair, it could eventually kill the California fishing industry, so they came up with a cockamamie excuse to give them time to, at least clean up a little bit, and hope that Californians wouldn’t notice that what they are actually putting on their dinner tables is radioactive seafood.

In an interview made by New York-based radio station 95.1 FM with a group of insiders from the California Fish and Game Commission, radiation in the west coast are so high that state officials knew it would cause immediate sickness for anybody who ate seafood caught in the area.

“If people started connecting the dots proving radiation in seafood was making them sick, it would utterly destroy California’s seafood industry in days,” one of the insiders said in the interview.

Are you still willing to satisfy your cravings for lobster in California? Let us know in the comments below and share this news.

This article (Fukushima Nuclear Disaster Derails California Commercial Crab Fishing) is free and open source. You have permission to republish this article under a Creative Commons license with attribution to the author and TrueActivist.com.