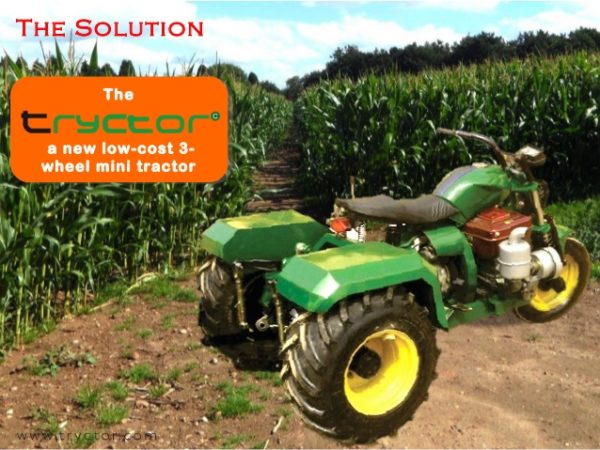 There is vast arable land suitable for farming activities in many African countries. However, the agriculture sector is still very underdeveloped in many of the continent’s nations.

This is because the sector is still manual. High cost of farm machineries prevents farmers from modernizing their work. Farmers have no choice than to cultivate small land to feed their families. This subsistence way of farming has effected the economies of many nations on the continent. In Africa’s most populous nation, Nigeria, the agriculture sector employs the majority of the population, contributing largely to the Gross Domestic Product of the country.

However, the sector’s true potential is yet to be explored in the country. The United Nations International Fund for Agricultural Development (IFAD) estimates that only half of the country’s 71 million hectares of arable land is being cultivated. This has made it difficult for local food production to keep up with the population growth, resulting in rising food imports and prices. It is estimated that Nigeria spends about $6.5 billion importing food into the country each year.

IFAD believes about 80% of Nigeria’s food is produced by small-scale and subsistence farmers, who struggle to increase production. Most of these farmers live in poverty and do not have the finances to improve farming yields through mechanization.

It is against this background that engineer Olufemi Odeleye has invented a small tractor for these small scale farmers, in order for them to use to expand their farming activities. Mr Odeleye is said to have trained as an automobile engineer in the United Kingdom. For the past 10 years, since he returned from the United Kingdom, he has devoted his time to developing a low-cost, multipurpose mini tractor for small scale farmers in his country.

His invention, a small tractor known as the Tryctor, was adopted from a local vehicle that runs on three tyres, carrying goods and human beings. Odeleye explained how he invented Tryctor. “I identified the need to contribute to the number one Millennium Development Goal – to eradicate extreme hunger and poverty. I studied automobile design in the UK and on my return to Nigeria I started looking for ways in which I could contribute. It has always been my design philosophy that you should use things you have at your disposal to solve problems. So I saw the motorbikes and I thought I should be able to use them to do something. When I got home I immediately put pen to paper and did some sketches and modified a motorbike and about a month later I made a prototype, which was basically the first of seven prototypes. And that is how I started. I saw that opportunity; it came to me in a light-bulb moment.” According to the detail of Odeleye’s invention, the three-wheel mini-tractor is suitable for farming. It has a 30-horsepower engine that can be used as a generator, and despite the fact that it looks like a motorbike, it has a gearing system that operates similarly to a traditional tractor, burning less fuel. It comes with various farming implements including a disc plough, harrow and trailer, which will help to improve crop production, supply markets and ultimatley increase revenue. Also, the engine of the Tryctor can be used to power processing machines such as those used for shelling maize and irrigation pumps. In areas where electricity is not available, farmers can use the engine to power their homes. In fact, those who have seen the machine have testified that it is a multipurpose machine, which brings value to small-scale farmers in terms of increasing their income and improves their standards of living.

Currently, the headache for Mr Odeleye is the price. The price of a traditional tractor in Nigeria is about $20,000. Mr Odeleye’s Tryctor, together with the farming implements, cost $9,500. However, this amount is still very expensive for poor farmers in the country. Odeleye is now encouraging farmers to come together so that they can contribute and buy the machine in groups. He said: “Even if it costs $2,000, the reality is that in Africa you don’t really get smallholder farmers who can afford that. We are now targeting farming cooperatives that normally have better buying power than single farmers. Whole idea is farming cooperatives can come together, buy maybe two or five, and share them among their members. They can then also rent it out to other farmers to generate income. So those are the routes which we are looking at.”

Odeleye’s Tryctor has been shortlisted for the Innovation Prize for Africa this year. The organizers of the prize have taken a strong interest in Odeleye’s invention.

This article (Engineer Designs and Builds Made in Nigeria, Small Tractors for Small Scale Farmers [Photos]) is a free and open source. You have permission to republish this article under a Creative Commons license with attribution to the author and AnonHQ.com.