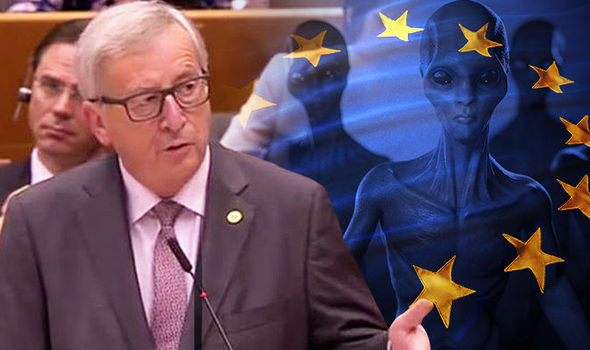 Alien conspiracy theorists from around the globe have been sent into a frenzy after European Commission president Jean Claude Juncker declared that he had “heard from the leaders of other planets” at a Brexit debate.

Clips of the European Commission president saying that the leaders of other planets are concerned about the Brexit decision, have since gone viral, prompting many to believe that the EU is in cohorts with extraterrestrials.

“You need to know that those who observe us from afar are worried.

“I have seen, listened and heard many leaders of other planets and they are very worried because they wonder about the course the EU will follow.

“So we have to reassure both the Europeans and those who observe us from afar.”

There are only two possibilities here, Juncker is trying to scare conspiracy types into a pro-EU stance or we’re ruled by reptile aliens.

Although this statement has led many to speculate that the EU is working closely with leaders from other worlds – hell, wouldn’t that make for an interesting story – it appears Juncker had actually meant to say “many leaders of our planet” rather than “leaders of other planets.”

While it is not officially certain whether the remark was a simple mistake, a debate surrounding the authenticity of the statement has sparked on social media.

If aliens came down to earth and saw the state of the UK they’d obliterate us just to put us out of our misery. AND WE’D STILL BE IN THE EU.

This article (EU Working With Aliens? ‘Leaders of other planets’ are concerned about Brexit, Said EU Chief ) is a free and open source. You have permission to republish this article under a Creative Commons license with attribution to the author and AnonHQ.com.