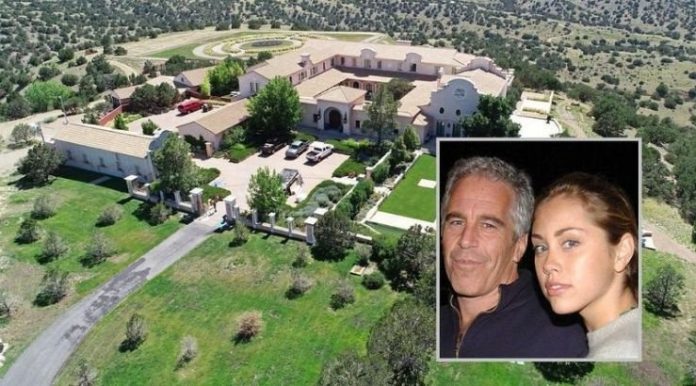 (ZH) — Jailed pedophile Jeffrey Epstein wanted to seed the human race with his DNA by impregnating scores of women at his giant ranch in New Mexico, according to the New York Times. He also wanted his penis and head cryogenically frozen.

Epstein shared his scheme with scientists and other confidants over the years, according to four people who were in on the plan – which “reflected his longstanding fascination with what has become known as transhumanism: the science of improving the human population through technologies like genetic engineering and artificial intelligence,” according to the report.

“On multiple occasions starting in the early 2000s, Mr. Epstein told scientists and businessmen about his ambitions to use his New Mexico ranch as a base where women would be inseminated with his sperm and would give birth to his babies, according to two award-winning scientists and an adviser to large companies and wealthy individuals, all of whom Mr. Epstein told about it,” according to the report.

Once, at a dinner at Mr. Epstein’s mansion on Manhattan’s Upper East Side, Mr. Lanier said he talked to a scientist who told him that Mr. Epstein’s goal was to have 20 women at a time impregnated at his 33,000-square-foot Zorro Ranch in a tiny town outside Santa Fe. Mr. Lanier said the scientist identified herself as working at NASA, but he did not remember her name.

According to Mr. Lanier, the NASA scientist said Mr. Epstein had based his idea for a baby ranch on accounts of the Repository for Germinal Choice, which was to be stocked with the sperm of Nobel laureates who wanted to strengthen the human gene pool. (Only one Nobel Prize winner has acknowledged contributing sperm to it. The repository discontinued operations in 1999.)

Mr. Lanier, the virtual-reality creator and author, said he had the impression that Mr. Epstein was using the dinner parties — where some guests were attractive women with impressive academic credentials — to screen candidates to bear Mr. Epstein’s children. –New York Times

Epstein, charged in July with sexual trafficking of girls as young as 14, was a prolific liar and manipulator according to the Times, which notes that the ‘serial illusionist’ lied about his clients’ identities, his net worth, his financial prowess, and other personal achievements – all in an effort to worm his way into the upper echelons of society.

As the Times goes on to note, even after his 2008 conviction on charges of soliciting prostitution from a minor, Epstein was able to ingratiate himself with the scientific community, attracting a “glittering array of prominent scientists.”

They included the Nobel Prize-winning physicist Murray Gell-Mann, who discovered the quark; the theoretical physicist and best-selling author Stephen Hawking; the paleontologist and evolutionary biologist Stephen J. Gould; Oliver Sacks, the neurologist and best-selling author; George M. Church, a molecular engineer who has worked to identify genes that could be altered to create superior humans; and the M.I.T. theoretical physicist Frank Wilczek, a Nobel laureate. –New York Times

Scientists had regular parties at Epstein’s Manhattan mansion, drinking Dom Pérignon and other expensive libations. The wealthy financier also hosted buffet lunchest at Harvard’s Program for Evolutionary Dynamics – to which he contributed $6.5 million in order to get it off the ground.

Harvard cognitive psychologist Steven Pinker says he was invited to “salons and coffee klatsches” at which Epstein would ‘hold court.’

While some of Mr. Pinker’s peers hailed Mr. Epstein as brilliant, Mr. Pinker described him as an “intellectual impostor.”

“He would abruptly change the subject, A.D.D.-style, dismiss an observation with an adolescent wisecrack,” Mr. Pinker said.

Another scientist cultivated by Mr. Epstein, Jaron Lanier, a prolific author who is a founding father of virtual reality, said that Mr. Epstein’s ideas did not amount to science, in that they did not lend themselves to rigorous proof. Mr. Lanier said Mr. Epstein had once hypothesized that atoms behaved like investors in a marketplace.

Mr. Lanier said he had declined any funding from Mr. Epstein and that he had met with him only once after Mr. Epstein’s 2008 guilty plea. –New York Times

One scientist who was aware of Epstein’s eugenics plan said he was told about it at a 2001 dinner at Epstein’s townhouse, while another scientist recalls hearing about it at a 2006 conference hosted by Epstein in St. Thomas in the Virgin Islands – just a short distance from his infamous ‘pedo island.’

One transhumanist interviewed by the Times notes that Epstein had discussed his interest in cryogenics – the preservation of human bodies via freezing in order to be revived in the future. Epstein said he wanted his head and penis to be frozen.

Southern Trust Company, Mr. Epstein’s Virgin Island-incorporated business, disclosed in a local filing that it was engaged in DNA analysis. Calls to Southern Trust, which sponsored a science and math fair for school children in the Virgin Islands in 2014, were not returned.

In 2011, a charity established by Mr. Epstein gave $20,000 to the Worldwide Transhumanist Association, which now operates under the name Humanity Plus. The group’s website says that its goal is “to deeply influence a new generation of thinkers who dare to envision humanity’s next steps.” –New York Times

Read the rest of the Times report here.