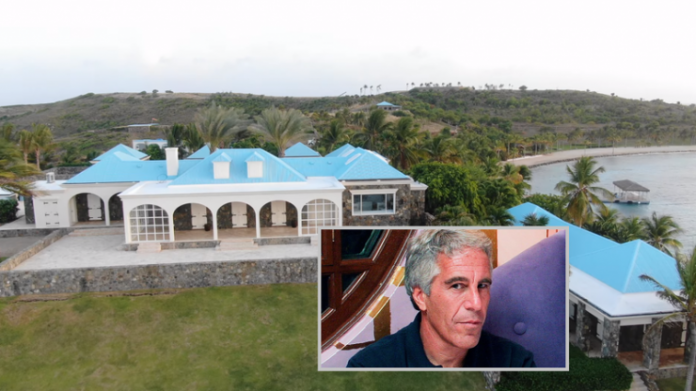 (ZH) — In 2003, Jeffrey Epstein sat for five hours to give a rare interview with journalist David Bank, offering his thoughts on subjects ranging from mathematics, to exorbitant wealth, to the important of prenuptial agreements.

After Epstein’s arrest on July 6, Bank dug out the tapes and listened to them. The financier was, Bank recalled, friendly and gracious, eager to pontificate about many things but cagey about exactly what he did in his role as financial adviser to Leslie Wexner, the billionaire he met in Palm Beach in the 1980s and who opened doors for him in business and finance and beyond. –Bloomberg

“But why speak here, in a gazebo steps from the crystal-blue sea, rather than up in the grand main house?

“Too many girls,” Epstein said. And with that, the tape began to roll.”

I realize what I am. I’m very comfortable in my own skin. I’m not a helicopter pilot. What I’m really free to do is I feel free to follow my own personality. As we discussed yesterday, I can’t be totally wacko in what I do. It affects lots of other people who will get angry with what I do because then it affects me again. But on my own island or on my own ranch, I can think the thoughts I want to think. I can do the work I want to do and I’m free to explore as I see fit.

Epstein also discussed his former clients and what he did for them, saying that he handled money for “Less than 10. More than four” individuals. He also went into some detail on how he counseled Victoria’s Secret head honcho Les Wexner. “I don’t tell him what sweaters to buy, he doesn’t tell me when to buy or sell stock.”

People would always call me and say, could you come look at my problems? Could you come see my situation and tell me what you think. And I started J. Epstein & Co. I think in 1982 or 1983. And I said I would only take you if you had a billion dollars or more.

Epstein says he went to “rough schools,” and never earned a college degree. Still, the prestigious Dalton School on Manhattan’s Upper East Side still hired him.

“It attracted me because I thought it would be a different class of students I hadn’t come across before,” said Epstein, who said that “this was going to be the flip side” to his meager beginnings on blue-collar Coney Island.

I saw lots of people doing lots of hard work and hard work didn’t translate into success either. It wasn’t what you knew or how hard you worked. In fact, the people who were doing construction on Telegraph Avenue at that time were, I remember seeing some people, you know, coming in at seven o’clock in the morning and spending 12 hours working and look they still were neither happy or successful. So it’s not about what you know. And what I learned from Dalton later, lots of it in fact turns out to, not necessarily who you knew, but who you came in contact with.

Epstein then goes into his time at Bear Stearns, whose CEO Alan “Ace” Greenberg he met through his job at Dalton. Greenberg summoned Epstein to his office and hired him on the spot.

I started at Bear Stearns in 1976. Bear Stearns never had any training program. There was no course to begin. Alan Greenberg said he wanted me to learn each area of the business. So he thought the best place for me to start would be on the floor of the American Stock Exchange and then later move up to the trading desk and learn all the different areas of the firm including the margin department. He was amazing.

Epstein said his ability to comprehend options pricing allowed him to quickly rise through the ranks at Bear Stearns – resulting in his temporary role as a limited partner.

The way I saw it was physics, which was in fact based on a fixed number of rules and you did experiments in physics that couldn’t violate those rules and if your experiment worked you hit the target. Finance seemed to be a different metaphor for the same processes but when you hit your target, you were able to fly first class to Paris.

What the tapes don’t reveal is how Epstein got so rich.

“At the time of his arrest on federal charges that he molested and exploited dozens of teenage girls, he was worth more than $500 million, according to a financial disclosure his lawyers filed in an unsuccessful request for bail,” reports Metcalf.

According to the report:

At Dalton, he said, he earned less than $20,000 a year. He made a “comfortable living,” during his five years at Bear Stearns. He set up J Epstein & Co. in New York in the early 1980s, later changing the name to Financial Trust Co. and moving its headquarters to the U.S. Virgin Islands. He bought Little St. James for $7.95 million in 1998 and nearby Great St. James in 2016 for $22.5 million. Just the property taxes on his homes in New York, New Mexico and Florida came to more than $600,000 last year.

As a money manager, Epstein earned fees for investment advice, tax services and estate planning. He bragged about how his decision to charge flat fees freed him from the pressure of incessant trading and differentiated him from stock brokers in an era when trading was commission based. –Bloomberg

“Having personal staff is the first great luxury,” said Epstein – however he also opined on wealth being a magnet for fraudsters.

“My concern is that people can make spurious allegations all the time,” said Epstein, adding “The idea is if nothing else he’ll buy me off. I’ll attack his reputation and he’ll buy me off.”

One of the biggest issues is if you have too much money most likely you won’t miss it if some is taken from you. That’s very important, which is in fact security concerns—and this is the reason I’ve always been private and wisely so—is as you become known as a philanthropist or in giving away money then you become the perfect victim of frauds and identity theft.

So what made Epstein tick? He said he loved music, and had played piano since the age of five. He also expounded on his love of mathematics and the sciences, describing the inner workings of the brain and evolutionary dynamics.

Epstein: I was always very good at mathematics.
Reporter: What made you interested in it?
Epstein: It was solving puzzles. It’s a strange feeling when you get the right answer to a puzzle. That leads to a later discussion about why people are so excited about puzzle solving and why is the brain itself both a predictor of things and an inherent puzzle solver. In fact, I hate to sort of jump again to more brain things but the idea of people receive pleasure when they get the right answer to a puzzle and the question is when you say pleasure, does that mean there’s a bit of dopamine released in the brain? What are the real mechanics? What’s going on in someone’s head when they have what Duchamp referred to as the Aha! moment.

According to Epstein, he’d sell any investment if it lost more than 10%.

“If I lose $10 million of a $100 million I’m out. Under no circumstances am I going to lose more than 10% of my investments,” he said, adding “I always want to have enough money to stay in the game.”

There was a book I read when I first started on Wall Street which was called “Sell is a Four Letter Word,” which meant that people get attached to things. They refuse to sell, or they refuse to resign, and they make up lots of reasons why that they’re sticking around. Whether it be in relationships with other people, or with stocks. People have stocks that go down and they tell themselves I know I should have sold then, but I can’t sell now.

Lastly, Epstein talks about his relationship with JP Morgan Chase – a bank which severed ties with the millionaire pedophile as his downward spiral picked up speed.

JPMorgan is probably the best private bankers in the world. The head of private banking you should talk to—Jes Staley. They know they can call up and ask me, you know, there’s an opportunity here and might take a very large sum of money, $100 million or more, whatever the number may be. And I can give them an answer by the end of the telephone call.

Meanwhile – notwithstanding new recordings emerging, this appears to be the last we’ll hear from Epstein, as dead pedophiles tell no tales.