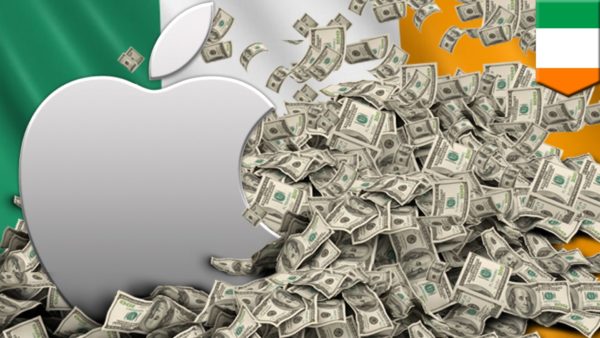 It isn’t secret how the United States is being run by multiple corporations. The political actors in the White House and Congress are just surrogates of the corporations.

Critics have given doomsday warnings for American citizens, if this path the United States has chosen continues. Currently, the corporations have become more powerful than the nation, receiving all vital decisions in their favor, only to the detriment of the American public.

But as the saying goes, “you can never hide the behavior you learn from home everywhere you go.” This is very true. American companies are pampered in their nation. Therefore, everywhere they go, they want to show their pomposity. However, the rules are not the same everywhere. You will likely to be held fully accountable somewhere in the world. Just as what’s happened to Apple.

The European Union (EU) Commission has ordered Apple Incorporated to pay an amount of 13 billion Euros ($14.5 billion) to the Republic of Ireland for receiving illegal state aid by not fulfilling its full tax obligations to the country. Apple, an American multinational technology company designs, develops, and sells consumer electronics, computer software, and online services.

Apart from Apple, another American company, Starbucks has also been ordered to pay up to 30 million Euros ($33 million) to the Netherlands for a similar offence. Amazon and McDonald’s are also under investigation by the EU Commission. A United States Treasury spokesperson warned how the decision by the EU will undermine the country’s investment in Europe, also undermining the important spirit of economic partnership between the United States and the EU.

Yet the EU Competition Commissioner, Margrethe Vestager replied that the EU is only ensuring that the right laws are followed in its territories. Vestager further revealed how the Irish government’s arrangement with Apple allowed the tech giant to pay a ridiculous tax rate of 0.005% in 2014.

“Tax rulings granted by Ireland have artificially reduced Apple’s tax burden for over two decades, in breach of the EU state aid rules. Apple now has to repay the benefits,” Vestager told journalists to debunk the American government’s view that its companies are being unfairly targeted by the EU.

According to details of the findings against Apple by the EU Commission, the way Ireland agreed to tax the profits of Irish-registered Apple subsidiaries, through which most of its non-United States profits flowed, was illegal. The Commission found that Apple had licensed the rights to technology, largely designed in the United States, to Irish subsidiaries. The company then hired contract manufacturers to make the devices, which they sell to Apple retail subsidiaries around Europe and Asia. Since the manufacturing cost is a small portion of device sales prices and retail subsidiaries are allocated a small operating margin, Apple Ireland is very profitable. In 2011, Apple Ireland reportedly earned $22 billion. It later paid $2 billion to its parent company in the United States for rights to Apple intellectual property.

But surprisingly, the EU Commission revealed the Irish tax authority allowed Apple to pay only $53 million to the country as its corporate tax obligation.

Also, the Commission found that under the terms of Apple’s tax deal with the Irish government, first agreed in 1991 and renewed in 2007, Apple allocated most of the profits earned by its Irish operating units to a “head office,” which was discovered not to have any employees, or own any premises. The Commission said this agreement had no basis in tax law, and was not available to others; representing deliberate state aid by the Irish government for Apple.

According to the Commission, such are sweetheart tax deals deliberately done by smaller nations in the Union, in order to lure multinational companies to create jobs and investment in their countries.

“This ‘head office’ had no operating capacity to handle and manage the distribution business, or any other substantive business for that matter,” the Commission said. Meanwhile, the Irish Finance Minister, Michael Noonan has said the government disagreed with the decision and would help Apple to appeal, stating the need to preserve Ireland’s attractiveness for investment.

“There is no economic basis for this decision. It’s bizarre and it’s an exercise in politics by the Competition Commission,” Noonan said.

This article (EU Commission Exposes Apple and Irish Government Sweetheart Tax Deals, Slaps Apple with $14.5 Billion Fine) is a free and open source. You have permission to republish this article under a Creative Commons license with attribution to the author and AnonHQ.com.