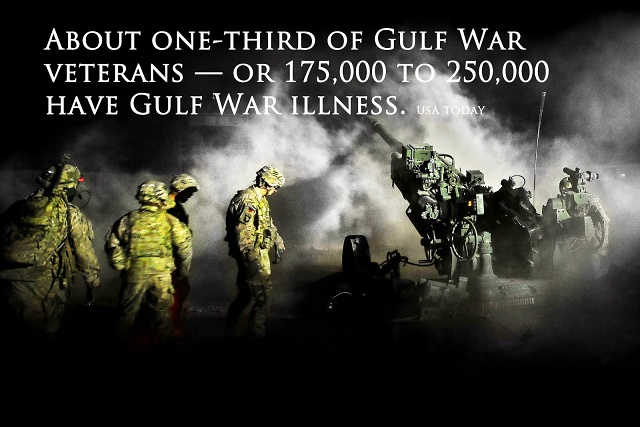 Gulf War Veterans’ Medically Unexplained Illnesses or Gulf War Illnesses (GWI), is a diverse range of unexplained chronic ailments that seem to affect numerous US and British veterans who have served in the 1990-91 Gulf War.

Veterans continue to exhibit symptoms some two decades after the war, with more than a third of all soldiers (or over 250,000 of 700,000)  deployed thus afflicted. Disability claims for GWI is also approved by the US Department of Veteran Affairs at a three times lower rate than all other disabilities.

Researchers have finally found the  “first direct biological evidence” of damage to the blood of Veterans suffering from the ailment, according to Veteran Affairs Research Communications.

“Mitochondrial dysfunction among veterans with GWI may help explain, in part, the persistence of this illness for over 25 years. For example, chemical and environmental exposures during deployment may have provided the initial insult to mtDNA and accumulation of damage. Damaged mtDNA may subsequently impact the efficiency of electron transport chain complexes and activity, resulting in enhanced reactive oxygen species and further damage of mtDNA.”

According to the researchers, the control group consists of three veterans without GWI and four non-veterans, all with greater smoking histories than the veterans test group. Surprisingly veterans continued to exhibit significantly higher rates of mitochondrial DNA damage compared to the control group.

This is significant because those with greater smoking histories have a 5-fold number of mtDNA damage compared to those with lesser histories, yet Veterans’ DNA ended up worse for wear than even heavy smokers’.

Falvo’s team are looking to recruit 150 Veterans with and without GWI in order to confirm their results thus far. “More importantly, we want to gain new knowledge of the damage of mtDNA on mitochondrial function and the recovery process,” said Falvo.

“We need to be sure that our findings are robust,” he noted. “For us, that means confirming the present results but also investigating what might be contributing to mitochondrial DNA damage or its lack of repair.”

Other recent studies have found that veterans suffering from GWI with chronic musculoskeletal pain also suffered from white matter brain damage and that GWI sufferers, in general, had reduced brain volume.