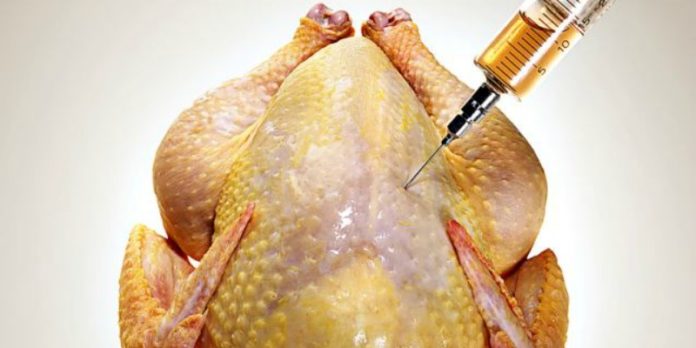 More than 70 percent of all US chickens raised for meat are fed 3-Nitro® (Roxarsone), the arsenic-containing drug that’s added to feed to fatten chickens and give meat from chickens, turkeys and hogs a bright pink tone. The Food and Drug Administration (FDA) scientists found that chickens treated with 3-Nitro® had high levels of inorganic arsenic in their liver.

The FDA then asked the pharmaceutical giant Pfizer to stop manufacturing Roxarsone. According to the Wall Street Journal, “The agency said it recently conducted a study of 100 broiler chickens that detected inorganic arsenic at higher levels in the livers of chickens treated with 3-Nitro compared with untreated chickens … Pfizer said sale of 3-Nitro would be stopped by early July in order to allow animal producers to transition to other treatments”.

Pfizer voluntarily pulled Roxarsone from the US market but it can reintroduce it since the FDA hasn’t banned its use; Pfizer still sells Nitarsone, another arsenical drug similar to Roxarsone.

FDA in the past had maintained that the arsenic in chickens is safe for consumption even though it has been clinically proven that ingested arsenic can be extremely toxic to human health, causing neurological defects in developing foetuses and young children, Bowen disease, internal cancers of the lung, the kidney, the bladder, and the liver, cardiovascular disease, type 2 diabetes, cognitive deficits and adverse pregnancy outcomes.