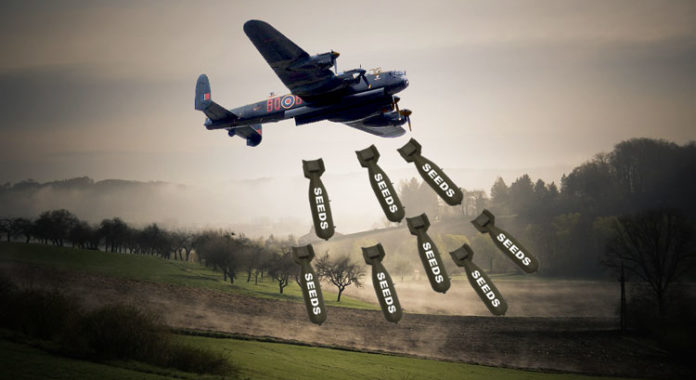 It may have cost the American taxpayer a billion bucks to bomb ISIS (yet have them mysteriously capture ever greater swaths of territory. Are they really trying to bomb ISIS, or trying to fill the yearly quota for money paid to the military industrial complex by bombing infrastructure and civilians?), but you’re not going to have to break the bank to start your own war on… deforestation? Basically, get a drone, add seeds and dirt, and you’re done. Ok, so you might need to do a little bit more than that.

As reported by The Guardian:

“Equipment installed in the huge C-130 transport aircraft used by the military for laying carpets of landmines across combat zones has been adapted to deposit the trees in remote areas including parts of Scotland.An idea, originally from a former RAF pilot, Jack Walters, of Bridgnorth, Shropshire, has been developed by the US manufacturer Lockheed Martin Aerospace so that 900,000 young trees can be planted in a day.”

“Seed bombing is also widely used in Africa; where they are put in barren or simply grassy areas. With technology expanding, the contents of a seed bomb are now placed in a biodegradable container and “bombed” grenade-style onto the land. As the sprout grows, the container biodegrades into the soil. The process is usually done as a large-scale project with hundreds dropped in a single area at any one time. Provided enough water, adequate sunlight, and low competition from existing flora and fauna, seed-bombed barren land could be host to new plants in as little as a month.

In 1987, Lynn Garrison created the Haitian Aerial Reforestation Project (HARP) in which tons of seed would be scattered from specially modified aircraft. The seeds would be encapsulated in an absorbent material. This coating would contain fertilizer, insecticide/animal repellent and, perhaps a few vegetable seeds. Haiti has a bimodal rainy season, with precipitation in spring and fall. The seeds are moistened a few days before the drop, to start germination. Tons of seed can be scattered across areas in the mountains, inaccessible to hand-planting projects. Another project idea was to use C-130 aircraft and altering them to drop biodegradable cones filled with fertilizer and saplings over hard-to-access areas.”

Imagine a world where you dropped seeds on other countries, and the people… gasp… did not get blown up. If instead of sowing the seeds of hatred, and reaping a crop of extremist militants… we feed a people and they loved us for it? Craaazzzy. Of course, we would have to stop funding weapons manufacturers and mercenaries and even stop suppressing populations, maaayybe even cut back on the weddings that get blown up…. but hey, what’s a few sacrifices to actually make the world slightly better for once?