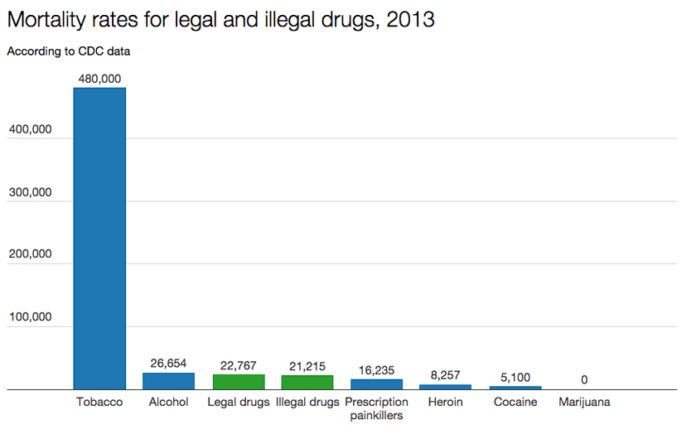 According to a report published by Scientific Reports, the deadliest legal drug in America is… alcohol! Surprised? It exceeds the deadliest of several illegal drugs and is reportedly 114 times more deadly than marijuana, the only federally regulated substance that has never caused a single death from overdose. The study assesses the ‘comparative risk’ of loss of life associated with the using of almost every form of drug including weed, meth and heroin. Marijuana was found to be far safer, compared to these drugs, than previously thought.

These conclusions were based off of the ‘margin of exposure‘, which calculates the probability of an average person ingesting a toxic dose of a substance by calculating the ratio between two factors. The smaller this ratio is, the greater the probability of a person accidentally consuming a toxic quantity and the smaller the possible error in the calculation. Alcohol, seems to have a lower margin of exposure than heroin, cocaine, nicotine, THC, Methadone and methamphetamines. According to the Controlled Substances Act of 1970, marijuana, which the study found to be the safest of tested substances, is ranked alongside Schedule I drugs like heroin, Ecstasy and LSD. Apparently that means  that in the eyes of the law, marijuana has, “a high potential for abuse,” no medicinal value and no means for being used safely under a doctor’s supervision. Marijuana, as studies have continually found,  has proven to be the contrary for all three of these.

Two of the most deadly substances, alcohol and nicotine according to the study, are laxly regulated and easily available to anyone with a few dollars to spare. Even cocaine is deemed less harmful than marijuana, only meriting a scheduale 2 classification because dentists had once used it as a numbing agent. The law thus determines that cocaine has a, “currently accepted medical use in treatment in the United States,” while Marijuana does not.

Heroin is the second deadliest drug, yet medication that causes addiction to it such as Percocet, Vicodin and Oxycotin are prescribed at an alarming rate.  Scientists from George Washington University discovered that, “between 2001 and 2010, the percentage of overall emergency department visits where an opioid analgesic was prescribed increased from 20.8% to 31%,” and that prescription rates for, “Dilaudid, one of the most potent yet addictive medications, went up 668.2%.” At least some change seems to be happening at the ‘state level’, as four states and DC have legalized recreational marijuana and 18 others have decriminalized it.