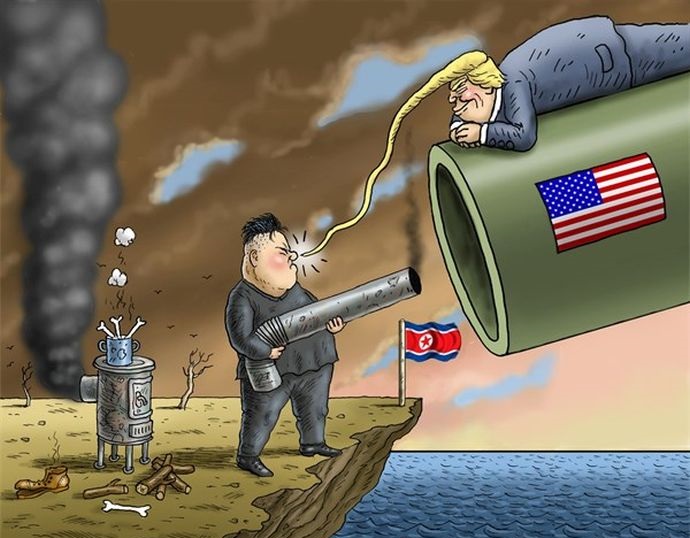 Although the United States–North Korea relations have historically been hostile, things got murkier after the U.S. military launched 59 Tomahawk cruise missiles on a Syrian airfield on April 7, and dropped its most powerful non-nuclear bomb on ISIS positions in Afghanistan on April 13.

While Russia described the April 7 attack on Syria as an “aggression against a sovereign state in violation of international law,” North Korea condemned the U.S. on April 13, warning it would retaliate to cast “nuclear thunder and punishment lightning” on hostile forces giving them a “taste of real war.”

On April 20, Kim Jong-un threatened to launch a “super-mighty pre-emptive strike” that will “completely and immediately wipe out not only U.S. imperialists’ invasion forces in South Korea and its surrounding areas, but the U.S. mainland, and reduce them to ashes.”

Following the warning, China, North Korea’s most important ally, immediately told its citizens living in North Korea to return home over fears that tensions between the U.S. and North Korea could escalate and trigger a U.S. attack on North Korea.

A Korean-Chinese citizen living in Pyongyang told Radio Free Asia that he had been visiting China every two to three months but after the Chinese Embassy in North Korea advised him to “stay in China for a while,” he left North Korea a month early. “The embassy has never given such a warning. I was worried and left the country in a hurry.”

“The embassy’s warning indicates that China is worried that the saber-rattling North and U.S. moves to destabilize the Kim Jong-un regime might affect Chinese citizens abroad. The North was expected to conduct its sixth nuclear test around the 105th anniversary of the state’s founder Kim Il-sung’s birth on April 15 and/or on the national military anniversary on April 25.”

The White House wants North Korea to give up its nuclear program, but sends a nuclear-powered aircraft carrier to Korean waters to frighten Kim Jong-un. The U.S. wants China to do more to rein in its neighbor’s nuclear and missile programs, but installs the THAAD anti-missile defense system (whose powerful radar can reach inside Chinese territory) in South Korea.

In response to North Korea’s claims that the reckless U.S. military provocation is pushing the situation on the Korean peninsula closer to the brink of nuclear war, China called the situation highly complex and sensitive, and urged all sides to “stop irritating” each other. Chinese Foreign Ministry spokesman Geng Shuang told Reuters:

“The urgent task is to lower temperatures and resume talks. We again urge all relevant parties to remain calm and exercise restraint, stop irritating each other, work hard to create an atmosphere for contact and dialogue between all sides, and seek a return to the correct path of dialogue and negotiation as soon as possible.”