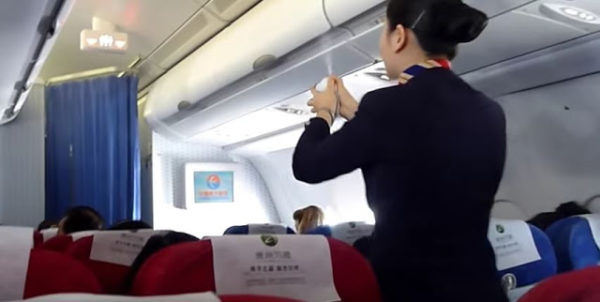 The natural health healer, Jonathan Landsman has made a damning revelation regarding what goes on inside the cabin of passenger aircrafts during flight time.

Landsman is the host of NaturalHealth365.com, a weekly health show  that educates people on how they can heal themselves naturally, instead of using medicines manufactured by the pharmaceutical companies. He is a credible source. His type of education is what the government and the big corporations would not like us to learn.

According to Mr Landsman, the process airline officials use to spray pesticides in the interior of aircrafts (cabin), is called “disinsection.”

In a video Landsman posted on RiseEarth, it showed a flight attendant of an airline disinsecting the cabin of an aircraft while passengers were on board. A passenger then began filming the attendant as she sprayed. When the attendant realized she was being filmed, she objected strongly to the filming.

Landsman said his investigations have proven that the International Civil Aviation Organization and the World Health Organization (WHO) have all approved aircraft cabins to be sprayed with what they described as a “fast-acting insecticide.”

He said some of the spraying is done when passengers are on board, right before takeoff. Some airlines will choose to spray their cabins with a residual-insecticide aerosol, before passengers get on board.

According to Landsman, he found that the United States Department of Transport (DOT), and the WHO have been actively advising airlines to spray the cabins of their carriers. Landsman quoted the DOT as saying that the supposed intent of the spraying is to protect public health, crops, agriculture and the environment.

The natural healer revealed most common aircraft pesticides used on airplanes are synthetic pyrethroids, specifically permethrin and d-phenothrin. These pesticides kill insects by attacking their nervous systems. Landsman asked: what are these chemicals doing to the human nervous systems, revealing that numerous studies have linked permethrin with Parkinson’s disease. “This is truly sickening behavior: These toxic chemicals are also being applied directly to the aircraft’s internal surfaces and, to make matters worse, passengers get to breathe in this crap into their lungs. Have you ever felt sick after flying, only to assume it’s jetlag or a virus you picked up from another passenger? Well, think again! You might have been exposed to an insecticide, pesticides or other toxic chemicals – deliberately used by airline staff. I think airline passengers should be outraged to know that poisonous chemicals are now being sprayed on planes regularly – DURING the flight, while travelers are inside the plane, This is true – the United States government is actually pushing this agenda of poisoning passengers,” Landsman wrote on RiseEarth.

It is said some airline passengers are already reporting negative health effects, from the exposure to toxic chemicals on flights. According to Landsman, passengers have reported flu-like symptoms, sinus issues, rash/hives, headaches and swollen joints just after their flight. Apart from these minor cases, Landsman said there are far more serious issues like acute respiratory problems and anaphylactic shock. Also, chronic issues affecting the neurological and immune systems, have also been reported.

“The spraying of toxic chemicals like pesticides or an insecticide inside an enclosed, pressurized airplane cabin is beyond alarming. It is an assault on the senses and nervous systems of the passengers of the plane. Those with a pre-existing health condition or compromised immune system are even more at risk for suffering unwanted health effects,” Landsman said. However, despite all these health concerns, it is said the WHO has downplayed the risk of the pesticides. The organization said there is no evidence that pesticide sprays cause risk to human health, and that the sprays are safe.

“The arrogance of these statements is appalling. Even a layperson knows not to use chemical sprays in an area that is not ventilated. In the short term, the only recourse is to avoid flights where this practice takes place. However, airlines should be strongly petitioned to find non-toxic methods of dealing with pests,” Landsman advised.

Landsman further advised that before passengers buy their flight ticket for a journey, they should make a call to the airline and ask whether they spray their cabins with pesticides while passengers are on board. He said, it is through this inquiry that passengers can find safe airlines to book a flight. Landsman’s revelation has been praised by observers. Some have said passengers of airlines should unite and take the issue seriously,  avoiding being exposed to these dangerous chemicals.

Landsman has reached hundreds of thousands of people worldwide as a personal health consultant, writer and radio talk show host. He has been educating the public on the health benefits of an organic, non-GMO diet along with high-quality supplementation and healthy lifestyle habits, including exercise and meditation.

We acknowledge that we sourced the article from RiseEarth. For further references on the article, you can consult these links below.

Sources: Jama Neurology, WHO, US Department of Transportation.

This article (Flight Attendant Caught on Video Spraying Pesticide on Passengers; Investigations Reveal is a Routine Practice [Video]) is a free and open source. You have permission to republish this article under a Creative Commons license with attribution to the author and AnonHQ.com.