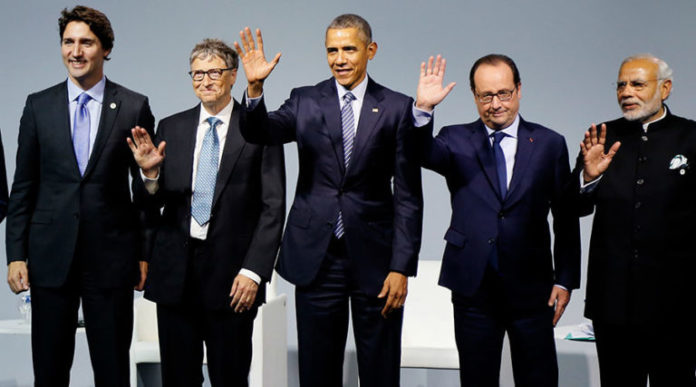 A retired NOAA scientist has proven that an influential study on climate change intentionally used manipulated data to suggest an increased rise in global temperatures.

On Sunday Feb 4, John Bates, former NOAA Meteorology Principal Scientist and winner of the US Department of Commerce Gold Medal in 2014 for his work in preservation of climate data records, published a bombshell post titled Climate Scientists Versus Climate Data, on the climate change blog Climate Etc., lampooning the seminal climate change work of former director of the National Centers for Environmental Information (NCEI) Tom Karl.

Bates claims to have extensive documentation proving that Karl made, ”decisions that maximize warming and minimize documentation. “ The report in question was published by the journal Science on Jun 4, 2015, just five months before the 2105 United Nations Climate Change Conference. The Karl report directly refuted the somewhat inconvenient 2013 UN IPCC (United Nations Intergovernmental Panel on Climate Change) report also known as the Fifth Assessment Report, which concluded that rate of global warming decreased from 1998-2012 when compared to the global warming trend from 1951-2012. The phenomenon was dubbed the “global warming hiatus”.

NOAA was quick to applaud the study on its website stating of the Karl paper shortly after it was published, “A new study published online today in the journal Science finds that the rate of global warming during the last 15 years has been as fast as or faster than that seen during the latter half of the 20th Century. The study refutes the notion that there has been a slowdown or “hiatus” in the rate of global warming in recent years.”

The report’s ultimate validation, however, was its influence on the 2015 UN Climate Change Conference. In his blog post Dr. Bates writes, “Gradually, in the months after K15 [Tom Karl’s paper] came out, the evidence kept mounting that Tom Karl constantly had his ‘thumb on the scale’—in the documentation, scientific choices, and release of datasets—in an effort to discredit the notion of a global warming hiatus and rush to time the publication of the paper to influence national and international deliberations on climate policy.” Indeed, world leaders have pledged hundreds of billions of dollars to support climate change research.

It bears mentioning that despite the unexpected results of the Fifth Assessment Report, the overall conclusion of scientists at that time remained dire stating that, “Warming of the climate system is unequivocal, and since the 1950s, many of the observed changes are unprecedented over decades to millennia.” They also stated that,” Human influence on the climate system is clear. This is evident from the increasing greenhouse gas concentrations in the atmosphere, positive radiative forcing, observed warming, and understanding of the climate system.” In effect, apart from the assertions of the Karl paper, the larger facts surrounding climate change remain the same according to the mainstream scientific consensus.

The conclusions drawn by Bates included recommendations for beefing up legislation regarding the archiving of federal climate data sets (the issue at the heart of Karl’s alleged malfeasance), enforcement of such legislation and, “a renewed effort by scientists and scientific societies to provide training and conduct more meetings on ethics.”

The wider significance of these allegations, however, cannot be understated given the current political climate. Climate scientists and policy makers fear the current administration’s efforts to undermine federal and international efforts addressing climate change could have long standing detrimental environmental effects. The Trump administration’s position on climate change have been made clear through their actions during Trump’s first week in office. For example, the EPA was ordered to remove its page on climate change. (The order has since been suspended.) Trump has openly tweeted his belief that climate change is a hoax stating, “The concept of global warming was create by and for the Chinese in order to make US manufacturing non-competitive.” It remains to be seen how the Bates allegations will affect the heated public debate. As of the writing of this article, Trump has not tweeted or publicly stated anything regarding this latest development on the climate change debate.

This article (Former NOAA Scientist Blows Whistle on Manipulation of Climate Change Data) is free and open source. You have permission to republish this article under a Creative Commons license with attribution to the author and True Activist.