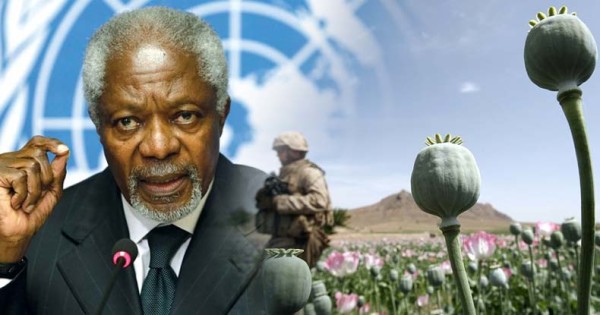 The former secretary general of the United Nations, Kofi Annan, has launched a campaign to appeal to governments around the world to consider legalizing marijuana and other psychoactive substances.

Mr Annan served as the seventh secretary general of the United Nations from January 1997 to December 2006. He was succeeded by Ban Ki-Moon.

In 2015, Mr Annan launched a similar campaign in West Africa to tell governments in the region that the so-called war on drugs has failed, and that legalization will help them earn revenue that would have otherwise been wasted on scarce resources aimed at fighting a war that can never be won. In a recent article Mr Annan published on Spiegel Online, he repeated the same statement. He said the governments’ prohibition of psychoactive substances, creates the false impression that enforcing it will prevent people from using it. According to the Ghanaian statesman, this false impression brings more danger to people than the drugs themselves.

Using the example of marijuana, Mr Annan emphasized the need for the world to realize that psychoactive substances have some health benefits, and that its legalization does not mean it will be abused, as the general perception suggests.

Mr Annan touched on regulation, public education, and taxation as the next steps, pointing to the decline in cigarette smoking in many countries. He cited the state of Colorado, where it is said the collection of taxes on marijuana in 2015 alone fetched the state government an estimated amount of $135 million. He said this approach saves scarce resources, and users become safe as there are formal procedures to determine who can purchase and what can be purchased.

“Initial trends show us that where cannabis has been legalized, there has been no explosion in drug use or drug-related crime. The size of the black market has been reduced and thousands of young people have been spared criminal records. Scientific evidence and our concern for health and human rights must shape drug policy. This means making sure that fewer people die from drug overdoses and that small-time offenders do not end up in jail where their drug problems get worse. It is time for a smarter, health-based approach to drug policy,” Mr Annan wrote. Mr Annan boldly blamed government policies for the current drug crisis around the world. According to him, prohibition has created a vast international criminal market for drugs that fuel violence, corruption and instability. It is estimated that the current drug trade on the black market is around $330 billion per year. Meanwhile, governments around the world spend about $100 billion a year in fighting the trade and its related activities.

In 2013, Mexico recorded 16,000 deaths which were directly linked to drug trafficking. In many developing countries, drug users are thrown into jail. This increases pressure on the limited prison facilities. Overcrowding, diseases, violence and corruption become institutionalized in such places.

“I believe that drugs have destroyed many lives, but wrong government policies have destroyed many more. We all want to protect our families from the potential harm of drugs. But if our children do develop a drug problem, surely we will want them cared for as patients in need of treatment and not branded as criminals. The tendency in many parts of the world to stigmatize and incarcerate drug users has prevented many from seeking medical treatment. In what other areas of public health do we criminalize patients in need of help? Punitive measures have sent many people to prison, where their drug use has worsened. A criminal record for a young person for a minor drug offence can be a far greater threat to their well-being than occasional drug use,” he argued.

This article by Mr Annan, comes two months before the United Nations General Assembly holds a special session on drugs. However, Mr Annan admitted that the United Nations has played a lead role in encouraging the prohibition of drugs some 50 years ago. The United Nations Convention on Narcotic Drugs in 1961, had the stated purpose to protect the health and welfare of mankind. According to the former secretary general, this purpose has failed. He believes it has brought destruction and misery.

Therefore, Mr Annan said he is determined to use the impending gathering of the world, to show that it is time for the world to re-think and move forward as a society. He said, “the world will have a chance to change course.”

This Article (Former UN Secretary General Is Now Campaigning For The Legalization Of Marijuana And All Psychoactive Substances) is free and open source. You have permission to republish this article under a Creative Commons license with attribution to the author and AnonHQ.com