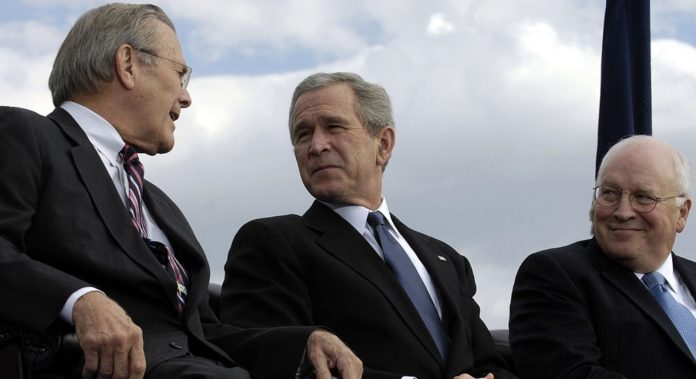 A lawsuit against members of the Bush administration for their role in the invasion of Iraq recently received noteworthy support from an internationally prominent group of lawyers—including a former U.S. attorney general. The group is asking the Ninth Circuit Court of Appeals to review the class action suit on grounds that the U.S.-led war was an illegal act of aggression in violation of international guidelines as defined by the Nuremberg Tribunal after World War II.

“Defendants planned the war against Iraq as early as 1998; manipulated the United States public to support the war by scaring them with images of ‘mushroom clouds’ and conflating the Hussein regime with al-Qaeda; and broke international law by commencing the invasion without proper legal authorization. More than sixty years ago, American prosecutors in Nuremberg, Germany convicted Nazi leaders of the crimes of conspiring and waging wars of aggression.They found the Nazis guilty of planning and waging wars that had no basis in law and which killed millions of innocents.” [emphasis added]

It should be noted as well that the Nuremberg Tribunal’s findings were specifically quoted in the suit, which has been undertaken as a pro bono case by Comar Law, based in San Francisco:

“[These] are charges of the utmost gravity. War is essentially an evil thing. Its consequences […] affect the whole world. To initiate a war of aggression, therefore, is not only an international crime; it is the supreme international crime differing only from other war crimes in that it contains within itself the accumulated evil of the whole.” [emphasis added in the lawsuit]

Saleh’s previous attempt to sue the Bush administration in the California court system was met with resistance from the government—including Obama administration lawyers—and was ultimately dismissed using the terms of the Westfall Act, which grants immunity to federal employees who act “within the scope of their employment.”

But the amicus brief submitted on Saleh’s behalf by the group of attorneys—including former U.S. Attorney General Ramsey Clark, the president of the International Association of Democratic Lawyers, the former president of the American-Arab Anti-Discrimination Committee, the former president of the National Lawyers Guild, a founding board member of the International Commission for Labor Rights, and the co-chair of the International Committee of the National Lawyers Guild, among others—states that the previous court was“forbidden” to use Westfall protections to dismiss the charges because the Nuremberg Tribunal established“norms” that prohibit “the use of domestic laws as shields to allegations of aggression […] National leaders, even American leaders, do not have the authority to commit aggression and cannot be immune from allegations they have done so.” [emphasis added]

A second amicus brief was also filed by the nonprofit Planethood Foundation—a compelling action in itself, considering the organization was established in 1996 by the sole surviving Nuremberg chief prosecutor, Benjamin Ferencz. This brief cautions that “those in positions of power” should not be allowed to subvert their influence to escape responsibility for their crimes. This brief cites the U.N. statement given after Nuremberg proceedings that, “planning, initiating, or waging a war of aggression is a crime against humanity for which individuals as well as states shall be tried before the bar of international justice.” [emphasis added]

The significance of these briefs cannot be overstated amidst increasing international attention on the case. Calls to charge the Bush administration for war crimes have grown intense as recent reports estimate well over one million people have died as a result of the Iraq war.

Hopefully, there will be an appropriate answer from the federal appeals court for Saleh’s lawsuit; because, as Comar told Truthout, “This is a horror that continues to play itself out, daily, in Iraq; the architects of such chaos have yet to be meaningfully questioned as to their role in this unmitigated tragedy.”