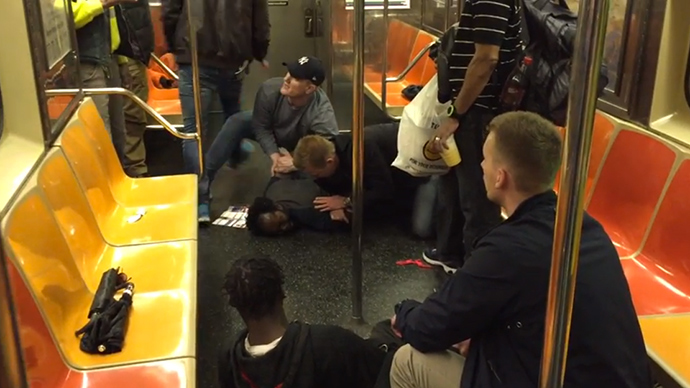 Erik Naslund, 26; Samuel Kvarzell, 25; Markus Asberg, 25; and Eric Jansberger, 28; on their way to see Les Miserables on Broadway, responded to an emergency call to break up a fight on a subway train as it pulled into Bleecker Street station. As passengers fled the Uptown 6 train, the tourists from Sweden bravely entered and tackled a homeless man who was beating another passenger, according to the New York Post.

A train passenger, Raymond Casanova, who captured the heroic act, said it was 15-20 minutes before NYPD officers arrived to relieve the men. “It was great police work on their part. If you listen to the audio carefully, you can even hear the Swedish officers asking the man they had been restraining if he was OK several times,” he added.

The four arrived on time for the start of the award-winning musical about 19th century France and after producers heard about their altercation, the young men were offered a backstage tour.

The four then met Police Commissioner Bratton and members of the NYPD Transit Bureau, who thanked them for jumping into the action on the train. “I would like to acknowledge them. There’s been a lot of attention paid to them, appropriately so, over the last day or so: a New York Post story and some other coverage. Gentlemen, thank you very, very much. You did a great honor to yourselves, certainly to your police service and to your country. We appreciate all the help we can get,” Bratton said. Privileged to meet with Swedish officers to thank them for all they did. Always on duty! http://t.co/T2Q3aYBEfS pic.twitter.com/RB1gvUWJ9u

The off-duty Scandinavian police officers have since been hailed as heroes in New York. Despite their new found celebrity status in America, the modest foursome insists their bravery was no big deal. “We came here for vacation; we’ve been here one day. We’re no heroes, just tourists,” Marcus Asberg said. “It was pretty routine. We came just to make sure no one got hurt,” said Eric Jansberger.

Nonetheless, the Swedish officers showed how to restrain violent suspects without injuring them – the incident provided a stark contrast with the horrific scene that saw Eric Garner fatally subdued by the NYPD, in 2014.

#Swedishcops show the #NYPD how not kill people, eg. by treating people with respect. http://t.co/nLskhQJI0K

Maybe the #NYPD should learn from the #swedishcops on how to subdue a situation like what happened. Maybe less people would die… — Andrew Carlos (@AndrewCarlos10) April 24, 2015