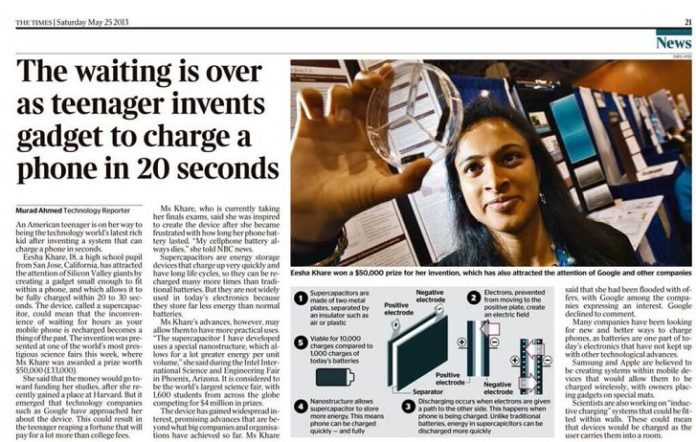 Currently, we have to wait for minutes or even hours before our mobile phones and other gadgets can garner enough power to function. The waiting period is a problem that needs a solution. In 2013, an Indian-American teen named Eesha Khare had a fantastic solution to this problem.

Khare was born in Saratoga, California. She attended Lynbrook High School. On May 17, 2013, Khare was adjudged a runner-up at the Intel International Science and Engineering Fair held in Phoenix. The competition had attracted 1,600 other finalists from more than 70 countries. The fair showcases inventions and innovations in science, engineering and technology. The then 18-year-old teen had worked very hard to develop a supercapacitor prototype that is capable of charging mobile phones and other portable devices in just 20 to 30 seconds.  Khare was awarded $50,000 for inventing such a wonderful and needful device. She was presented with the award at the Intel International Science and Engineering Fair that year.

Not only could the device charge phones, but hypothetically, it could be scaled up to charge electric cars as well. The teen was supervised by Dr Yat Li at the Department of Chemistry and Biochemistry, University of California, Santa Cruz, during the conceptual stage of the device. Khare designed, synthesized, and characterized a novel core-shell nanorod electrode with a hydrogenated TiO2 (H-TiO2) core and polyaniline shell, fabricated into a flexible solid-state device. Her tests reportedly showed 238.5 Farads per gram, 20.1 Watt-hours per kilogram, 20540 Watts per kilogram, and only 32.5% capacitance loss over 10,000 charging cycles.

According to Khare, her device can last for 10,000 charge-recharge cycles, compared with 1,000 cycles for conventional rechargeable batteries – a remarkable achievement for the teenager.

Khare explained she has been fascinated by inventive science her whole life. She revealed further that she has a special interest in nanochemistry, and that she was inspired to invent the technology because her phone battery used to die quickly. In finding a solution to stop her phone battery from failing early, she came up with the supercapacitor.

“My cellphone battery always dies. Really working at the nanoscale to make significant advances in many different fields,” she told NBC News in an interview.

Khare first used her supercapacitor to power a light-emitting diode, or LED. It proved very good. Khare said the device is capable of fitting inside mobile phones and other portable electronic devices.

“It is also flexible, so it can be used in rollup displays and clothing and fabric. It has a lot of different applications and advantages over batteries in that sense,” she said.

But despite this great achievement, the U.S. government isn’t paying any attention to Khare. She received no scholarship to further her college education. She had to rely on the prize money she received at the Intel International Science and Engineering Fair to finance her degree. “With this money I will be able to pay for my college and also work on making scientific advancements,” Khare told the audience after receiving her $50,000 prize at the Intel International Science and Engineering Fair.

Since Khare presented her device to the public, she has gone quiet. It’s been four years now. We don’t know how far she has gone to get this useful device produced in commercial quantities to serve people or if her talents have been stifled. Let’s hope the cabals won’t kill off this wonderful initiative by a genius girl.

This article (Four Years Ago Teen Invented Device Capable of Charging Mobile Phones in 20 Seconds But Where Did She Go? [Video]) is a free and open source. You have permission to republish this article under a Creative Commons license with attribution to the author and AnonHQ.com.