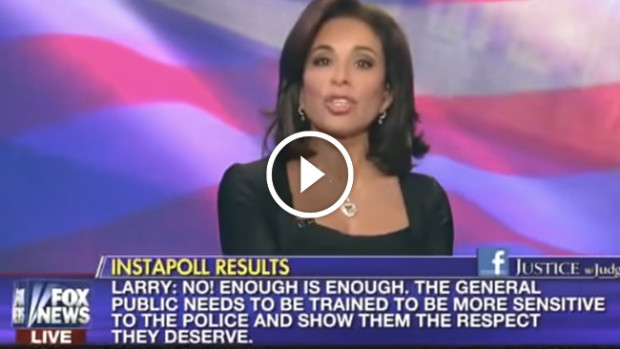 This is not an allegation. It is merely the official position of Fox News, in the wake of the recent white police officers’ brutalities against minority communities in the United States.

In a show known as Justice with Judge Jeanine, hosted by Jeanine Pirro on Fox News, the host asked her viewers regarding the issue of the recent killings of unarmed blacks, whether the real problem is with the police officers or the minority communities who have been suffering from these unfortunate incidents. She also asked whether cops need to be retrained and to be more sensitive to the needs of the minority communities, or whether minority communities need to be trained to be more sensitive to the police. Jeanine’s questions became an Instant poll and resulted in an abundance of opinions flying into the show.

Specifically, the two questions were embedded into the poll and were asked as one question: “Do police need to be retrained on how to be sensitive to the minority community?”

On the sensitive issue, which has generated lots of controversies across the US, one will expect that the host will take a detached stand on the issue. But this was never the case. She blatantly exposed her bias, partiality as Fox News wants her to do. Throughout the show, Jeanine kept on making a finger gesture in the air whenever she mentions the word “minority” and it is unclear why she kept on doing that without the producer of the show stopping her.

She said that the results of the poll were “overwhelmingly in favor of law enforcement.” She quoted Fox viewer-Jeff who answered, “Why is it always necessary to tip toe around the minority community?”

Then she added another comment from a viewer named Larry, who said “No. Enough is enough. The general public needs to be more sensitive to the police and show them the respect they deserve.”

And that is where she exposed herself. All of a sudden, she exclaimed: “I agree. The general public needs to be more sensitive to the police.”

Then in an effort to deceive viewers that Fox News is fair and balanced, she deliberately quoted a dissenting opinion from a viewer named Jordan who disagreed, saying “Yes-those cops were racially profiling.”

From the comment, made by the viewer named Jordan, Jeanine decided to use it as a platform to further bring her personal feelings and sentiments into the show.

“Hey Jordan, you don’t even know what racial profiling is. That’s when race is used to engage law enforcement in the minority community. But offender profiling is when an offender is ID by a description including his race, which is the only way to investigate some of these cases”, she rudely replied to the viewer named Jordan.

Now that Fox News has explicitly showed their bias nature, it fair for some to believe that the news organization is racially bias. No doubt about that. At this particular moment in the US, we do not need news organizations like Fox News to be doing what they are doing. We need messages that will expose the injustices, and make sure that they are corrected for the benefit of every single individual living in the US.