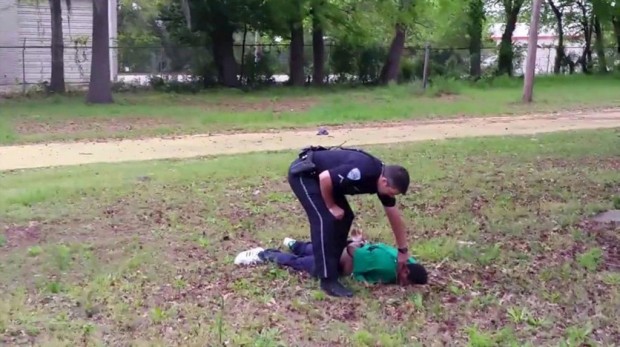 The officer, identified as Robert Bates, said he used his gun instead of a taser and that it was a mistake that he committed the heinous crime. The victim has been identified as Eric Courtney Harris. The footage of the shooting was captured on another deputy’s body camera.

The footage was said to have been posted by the police department. In the video, the victim is seen running down a street away a pursuing police car. An officer then runs up to him, catches him, bounds him while on the ground and then shoots him in the heard.

Thereafter, the victim starts moaning in pain and crying while other police officers approach the scene and try to resuscitate him.

“He shot me!” Harris shouts several times, and then says, “Oh my God, I’m losing my breath.” But one of the officers is heard telling him, “Fuck your breath!”

For Bates, who fired the gun, he starts to plea for mercy in the video. “I shot him. I’m sorry,” Bates’ voice appears to say in the video. Bates was named the town’s ‘Reserve Deputy of the Year’ in 2011, according to the Sheriff’s Office website.

Despite the medical aid administered, Harris later died at the hospital. The incident has heightened tension in Tulsa and across the US. A week ago, a white officer in South Carolina shot and killed an unarmed black man, Walter Scott, who tried to escape a traffic stop due to a broken tail light.

Thousands marched in the streets across the US in what they described as racist and discriminatory attitude of the police toward black suspects. In March of this year, the Justice Department said in a report that it has found systemic overly-aggressive policing for municipal code violations with blatant racial bias against black people in Ferguson, Missouri. According to the District Attorney’s office, even if Bates is convicted he would only face a maximum of four years in prison and a fine that would not exceed $1,000.

The Oklahoma law defines culpable negligence as, “the omission to do something which a reasonably careful person would do, or the lack of the usual ordinary care and caution in the performance of an act usually and ordinarily exercised by a person under similar circumstances and conditions.”

The defendant is presumed to be innocent under the law but we will be prepared to present evidence at future court hearings.

Bates has so far refused to comment on the situation, despite several attempts by local media outlets in Tulsa to try and get him to elaborate more on the incident.

“It was me. My attorney has advised me not to comment. As much as I would like to, I can’t,” he told Tulsa World.

Eric Courtney Harris was said to be a convicted felon. According to a police report on the incident, he was being detained after being caught selling a weapon to an undercover officer. Over the last 10 years, Harris had six criminal felony cases and a Misdemeanor-1 case filed against him: he made threatening phone calls, escaped a penal institution in 1990, and carried out an armed robbery. Most recently, Harris had come to the attention of police for suspected crystal meth distribution.

It is believed the incident happened early this month but it is unclear why the police kept it secret until the video was made public.