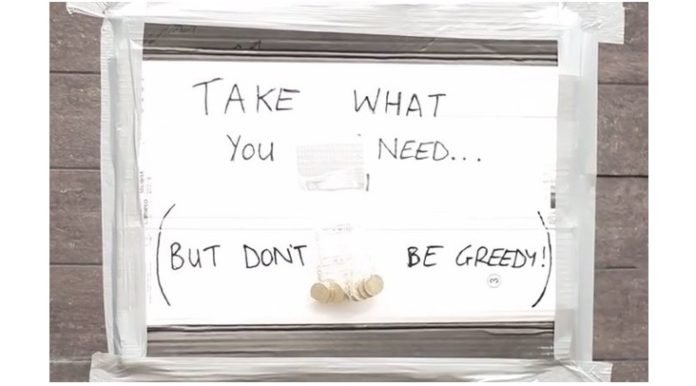 What would you do if you see 10 coins of £1 lying in a bag on a street wall with a message saying “take what you need, but don’t be greedy!”? Take out the coins, or add some more for the needy? When TheLadBible set up a social experiment to test the ‘kindness’ and ‘charity’ of Manchester’s residents and document the consequences when free money ‘for the needy’ was left stuck on a wall, the result was shocking, to say the least.

The 80-second clip shows the majority of Manchester residents staring at the sign and walking away, but with no one touching the “Free Money.” Then, two homeless men are seen taking out 2 coins from the bag, leaving the balance to £8. A few seconds later, two kids and a young man are seen approaching the bag. But surprisingly, only 2 coins were removed by them, leaving the balance to £6. People who say that free money makes people lazy, and poor people are greedy for free money, should watch the below video to see what happens in the end…

According to a recent alarming report by the Joseph Rowntree Foundation, more than a fifth of Manchester’s population — 620,000 people including 180,000 children — live below the poverty line, despite huge economic growth in recent years. Thousands of people lack two or more of six ‘essentials’ — shelter, food, heating, lighting, clothing and footwear or basic toiletries; while hundreds others cannot afford to purchase any of these basic items for themselves.

“That levels of poverty and inequality remain so high in Greater Manchester is unjust — and a waste of too many people’s talents and energies. We urgently need to find ways to include more people in the benefits of increased prosperity. We hope this report will be a ‘call to action’ to anyone who wants to see a more inclusive Greater Manchester— not just a more prosperous one.”

A society that forgets its poor is a poor society. But a society that makes rich people richer and poor people poorer, is a degraded society. When poor residents in rich Manchester are unable to keep warm in the winter, are without enough food to eat, or have to make a choice between the two, how will England’s second major city avoid a poverty “time bomb” yet remain the country’s largest economy?

This article (Free Money Social Experiment Exposes ”Rich” Manchester [VIDEO]) is a free and open source. You have permission to republish this article under a Creative Commons license with attribution to the author and AnonHQ.com.