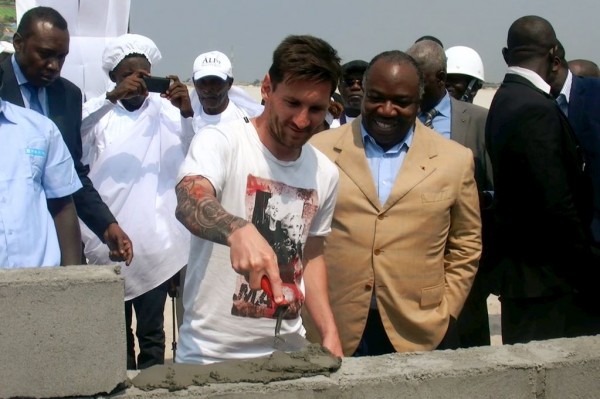 The president of Gabon, a central African country along the Atlantic coast, has reportedly paid a whopping £2.4m to the Argentinian and FC Barcelona football star, Lionel Messi for attending a brick laying ceremony for the construction of a new stadium.

Gabon has been awarded the right by the Confederation of African Football to host the 2017 Africa Cup of Nations. The country therefore needs to build a new stadium and upgrade existing football infrastructures in order to be able to host the rest of Africa in 2017. The country’s president, Ali Bongo Ondimba—who controversially became president after the death of his father, Umaru Bongo—is said to have splashed the £2.4m in order to get the four-time World Footballer of the Year to attend the ceremony and lay one of the new stadium’s foundation stones. The stadium is currently being built in the country’s commercial capital-Port-Gentil.

It is said Messi was granted time off from pre-season preparation by FC Barcelona following his exploits in the Copa America this summer.

After arriving in Gabon, the 28-year-old was driven around by the president himself before taking part in a ceremony at the stadium construction site. In a statement regarding Messi’s surprise appearance in Gabon, President Bongo said, “When I was in Barcelona a few years ago, I met Messi who had told me that he would come to visit me in Libreville. It is a promise he made me. He is a man of honour who just kept his word.”

But despite the president’s claims that Messi’s role in the ceremony was due to a previous vow he had made, France Football reported that the Barcelona forward was paid £2.4m to fly to Gabon for the ceremony.

It is said Messi’s former Barcelona teammates-Samuel Eto’o and Deco, helped arrange the trip. Eto’o and Deco are said to be very good friends of President Bongo.

When it came to light that the president had wasted a large sum of money just to get Messi into the country, many Gabonese and fellow Africans took to social media to express their dissatisfaction about the payment. Although Gabon is a oil-rich country, the Bongo family has turned the country into a dynasty and has monopolized all of the country’s resources, ultimately leaving the majority of the citizens in poverty.

Due to the public outrage against the payment, the Gabonese government was forced to issue a statement denying that Messi was paid that amount.

“The Republic of Gabon denies having paid, or even promised to pay, such a sum of money to the Argentinean international footballer Lionel Messi,” the Gabonese government said in a statement.

Meanwhile, in a new twist to the story, it is said thieves have stolen the very brick Messi laid at the ceremony during his visit. The L’Union Newspaper said, “The stone he symbolically placed for the construction of a new Port Gentil stadium, ahead of Gabon hosting the 2017 Africa Cup, has disappeared. Somebody has taken the stone on which Messi left his hand marks.”

This Article (Gabon’s President Allegedly Doled Out £2.4m To Messi For Helping Lay A Brick For Construction Of A New Stadium) is free and open source. You have permission to republish this article under a Creative Commons license with attribution to the author and AnonHQ.com.