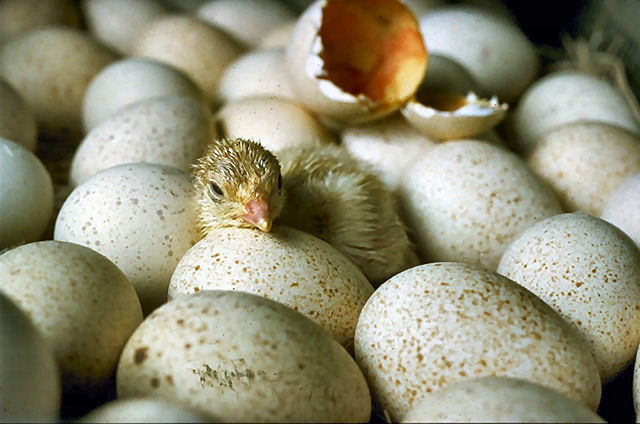 In Germany, where 45 million chicks are killed every year as part of the egg industry, Agriculture Minister Christian Schmidt is calling for a nationwide ban of this barbaric practice. Just minutes after the eggs hatch, the male chicks are divided from the female chicks and are either shredded or gassed because they are unable to lay eggs.

For the most part, this practice is considered routine procedure for the worldwide egg farming industry. In the United States alone, more than 200 million male chicks are killed every year. However, according to Schmidt there is an alternative. In March 2015, a German scientist announced that she has discovered a method of detecting the gender of a chick whilst it is still inside the egg. With this method, Schmidt hopes to implement the technique across the country.

“As soon as appropriate equipment is available on the market, there will be no justification for the hatcheries to kill hatched male chickens,” Schmidt said in a statement.

However, many animal welfare activists are unsatisfied with this alternative, and have explained that killing the egg before it hatches is not a humane solution. “This is more palatable for the public,” said PETA specialist Edmund Haferbeck. “But from an animal rights point of view, it’s just as bad.”

In addition to this, German chicken farmers are also unsupportive of this alternative method, expressing concern about the new technology becoming a handicap when competing against egg industries in neighboring countries. Instead they believe that regulations concerning the disposal of chicks should come from the European Union instead of the German government.

“While the minister’s initiative shows German leadership, the ZDG calls for a European solution, because a unilateral move could cause production to be relocated abroad,” the German poultry association ZDG said in a statement.

Schmidt hopes to implement the method by 2016, and entirely ban the slaughtering of baby chicks in the industry by 2017. If successful, Germany will become the first country to end this inhumane practice. However, this is not the first time Germany has attempted to ban the industry’s methods. Back in 2013, the western state of North Rhine-Westphalia passed legislation to ban the shredders. Unfortunately, this “law was repealed on the grounds that it violated the rights of German business enshrined in the constitution.”

This previous failure combined with the additional costs of Schmidt’s proposed alternative, have left both Haferbeck and the chicken farmers doubtful that the egg testing technology will replace traditional industry methods in the near future.

However, if the laws implementation was to fail, Lohmann Tierzucht, Germany’s largest chicken producer believes it could already have the solution. According to sources, the company has been working to create a chicken that can be used for both eggs and meat.

Although the hybrid chickens will lay fewer eggs than the standard Lohmann chicken and will weigh less than the chickens traditionally bred for meat, having chickens that fulfill both of the industry’s needs could provide a suitable alternative to the industry’s mass slaughtering of baby chicks.

This Article (Germany Looks To Egg Farming Alternatives To Save The 45 Million Baby Chicks That Are Killed Annually) is free and open source. You have permission to republish this article under a Creative Commons license with attribution to the author and AnonHQ.com.