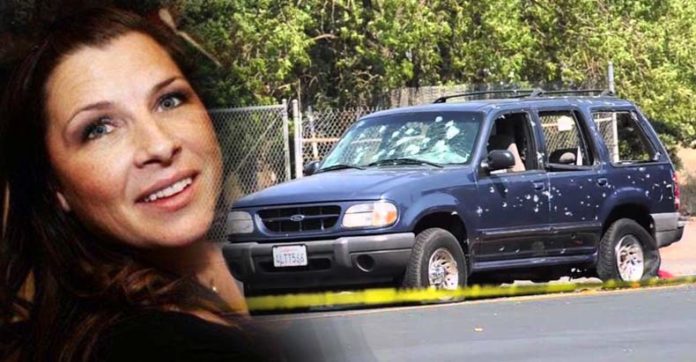 Written by Lou Colagiovanni at theantimedia.org

Las Vegas, NV – A new report by The Police Foundation (TPF), a Washington, D.C. research group whose “core mission is to advance policing” recently released a less-than critical report about the Stockton Police Department’s handling of an armed bank robbery that took place on July 16, 2014.

Three bank robbers fleeing the scene of the crime in an SUV took three female hostages and led police on a 63 mile chase with recorded speeds of 120 mph. Two hostages survived the encounter, one by being violently thrown from the vehicle and the other by heroically leaping from the vehicle while it was traveling at 50 mph. Misty Holt-Singh, the third hostage, did not leave the vehicle alive.

One might muse about why the chase transpired for such a length of time, asking why spike strips were not used to disable the vehicle. The answer is simple: the Stockton police department was in the midst of  bankruptcy and did not have the resources to procure the devices. This bankruptcy also led to the removal of over 100 veteran officers from their positions and allowed their places to be filled by rookie officers — many of whom had just graduated from the police academy a scant few weeks prior.

During the chase, the robbers sprayed bullets at pursuing police with an AK-47 and disabled 14 police vehicles, including a S.W.A.T. BearCat armored truck.

Eventually, police officers disabled the offending vehicle by filling the SUV’s tires with bullets when it passed through a residential neighborhood. A mile later, the SUV crept to a halt and continued to barrage police with AK-47 fire. 32 police officers fanned out around the vehicle and began to fire indiscriminately, shooting over 600 times. The TPF report described this tactic as “unnecessary” and “excessive.”

The greenness of the majority of responding officers was evident, as the report describes officers being “pinned down” by fellow officers shooting in their direction. By the time police halted their assault, three of the four vehicle’s occupants were dead: two robbers and remaining hostage Misty Holt-Singh, who had been shot ten times. The surviving robber is believed to have survived by using Holt-Singh as a human shield.

When asked by TPF investigators about the incident, an unnamed S.W.A.T. member said, “Our first priority, obviously, was the hostage.” That is a rather curious sentiment from an individual who opened fire on a vehicle containing said hostage.

The TPF report explicitly states, “What is not a goal is to criticize or blame the men and women of the Stockton Police Department.” Well, then, I’ll do the criticizing for them.

The death of Misty Holt-Singh raises a serious philosophical question about collateral damage, and how much is tolerated by police before they dismiss the value of that hostage’s life. Who has the right to make the decision that the life of an innocent person is no longer worth saving, no matter the cost? Before you dismiss the premise, simply ask yourself what you would like the policy to be if it were you or your loved one in the back of that SUV.

A day after the TPF’s report was released to the public, the family of Misty Holt-Singh filed a wrongful death suit naming the city of Stockton, the Stockton Police Department, and each of the 32 police officers who fired their weapons. Those officers’ names, according to recordnet.com, are as follows:

This article (Cops Shoot Hostage 10 Times, Claim Their “First Priority Was the Hostage”) is free and open source. You have permission to republish this article under a Creative Commons license with attribution to Lou Colagiovanniand theAntiMedia.org. Anti-Media Radio airs weeknights at 11pm Eastern/8pm Pacific. If you spot a typo, email[email protected].

Lou Colagiovanni joined Anti-Media as an independent journalist in July of 2014. His topics of interest include crime and politics. Born in New York City, New York, he currently resides in Las Vegas, Nevada. Learn more about Colagiovanni here!