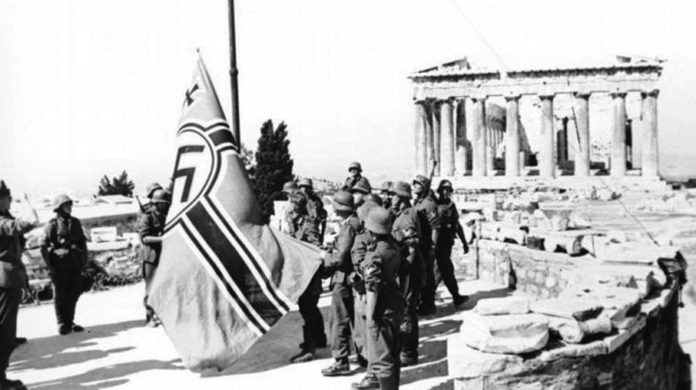 According to reports now circulating, Germany owes Greece billions of euros (the estimates vary), but the chances of compensation have been reported at zero. The question as to whether Greece’s current claim is valid has been put on the table, and most say, ‘yes.’

Whether or not Germany owes Greece money is not the question; during WWII, more than 800,000 Greeks perished, either from starvation, or being outright killed, and their military was powerless to prevent the Third Reich from forcefully taking an interest-free, 476 million Reichsmarks “loan” from the Greek central bank (something that devastated the Greek economy even further).

Germany claims to have already paid their debt—the equivalent of $25 million during the 1950s, and an additional 115 million Deutschmarks in 1960. Together this is a mere fraction of the cost of damage and what was taken, which has been estimated as high as 279 billion euros, and of course no price can be put on the lives lost. Germany claims the two payments were made with the agreement that no more claims would come, while Greece was apparently under the impression they were only initial payments, and more would come following Germany’s reunification. Now that Greece could really use that money, they’ve understandably brought the issue back up, but Germany won’t budge.

In regards to whether or not Germany is in the right for refusing this recent claim, the answers are mixed. On the one hand, it would be impossible to truly calculate the damage done by the Nazis during WWII, and even if it were possible, there’s no way Germany could hope to repay all their debts. On that note, if they agreed to pay Greece additional money now, it could potentially open the gate for other countries to make additional claims as well.

On the other hand, Greece has a rather large moral-standing on the issue: The country, people, and economy were devastated by the Nazi’s during WWII, and Germany largely ignored its WWII debts afterwards, so the question has been asked, “Why shouldn’t Greece benefit from a similar sort of debt restructuring and forgiveness that became a platform for Germany’s post-war economic miracle?”

The Syriza government has also brought to attention the fact that Germany defaulted on its WWI (first world-war) debts, “which were then largely written off by the London accord of 1953 or rescheduled to very long term,” according to the Wall Street Journal (source directly above). By some calculations, Germany was forgiven a debt worth some 280% of West Germany’s GDP at that time, whereas Greece is currently asking that around half of its debt, worth 175% of its GDP, be forgiven.

So you can see the dilemma, and it’s valid; one country was forgiven a debt after committing atrocities on another country that, for whatever reason, isn’t being forgiven its debt. Really though, at this point it becomes an issue that should be handled by the EU. In a report by Bloomberg:

“The German government has shown scant regard for Greek citizens. But isn’t the other side of pooling of sovereignty that Germany’s leaders should have a duty of care and respect to non-Germans? Countries that are uncomfortable with that requirement should perhaps have thought twice about building – then vastly expanding – the EU in the first place.”

In the end, the Wall Street Journal gave Greece some somewhat surprising advice:

“Discretely ignoring its WWII debts worked for Germany for decades. Greece would benefit from the same now.”

This Article (Germany Owes Greece Billions in WWII Reparations, and Nothing Will Be Paid) is a free and open source. You have permission to republish this article under a Creative Commons license with attribution to the author and AnonHQ.com.