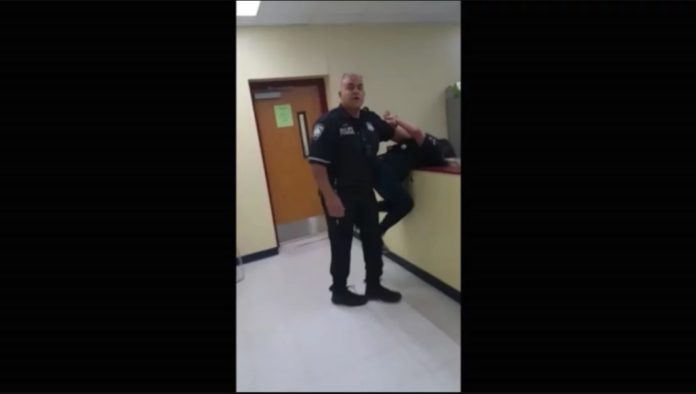 This week, people were reminded of the way police in Texas can be when a massive San Antonio police officer vented his rage on a handcuffed 16 year old girl in school because she “mouthed off.”

Now, the cop is under internal investigation since a cellphone video was released which depicted what usually goes unreported. The video shows a cop slam the 16 year old girl down onto the counter, and as she screamed for help he forced her down. What started this entire incident? Cussing, that’s what the girl and the San Antonio police department both report.

During school hours on Wednesday, the police were called to Por Vida Charter High School. The officer was not called to arrest this young girl, the call was about a woman speaking Spanish in the school’s office refusing to leave.

Apparently the woman didn’t understand English so they called the police, but 16 year old Tiffany Rodriguez didn’t like that. She spoke up about the woman being treated unfairly, and that’s why the cop took toward her with a bad attitude. This “mouthing off” was enough for the San Antonio cop to unload his rage on the 16 year old girl. He started throwing her around.

The video begins when people notice a cop is venting his rage on some young girl, and bystanders start recording, as they ask why the girl is being treated this way.

The bystanders start speculating on why she is being thrown around like a rag doll and pinned in a chair. One of them, Casandra Ortiz can be heard in the video suggesting that the cop shoved her in a corner because “she (Rodriguez) didn’t want to move over here.”

Rodriguez and Ortiz were in the office because on Wednesday they had been called to it for not wearing their uniforms and cussing.

“I knew her for so long it hurt me to see her getting thrown around everywhere,” Ortiz explained.

Ortiz’ own mother Jessica Villarreal took the video. She rushed to the office and started filming because she heard screaming, and she managed to make a difference and hold this angry cop accountable.

To make matters worse, after this young girl got a beating she was given a criminal record that will make it more difficult for her to find employment in the future.

The girl was charged with resisting arrest and disorderly conduct, and when she arrived at the juvenile detention center her shoulder and arm had to be examined for injuries.

When the San Antonio Police Department saw the video, surprisingly they launched an internal investigation.

“I just think that he shouldn’t be working as a cop if he is going to be doing that to kids,”said Rodriguez.

The cop was also wearing a body camera, but they did not feel the situation was important enough to release.