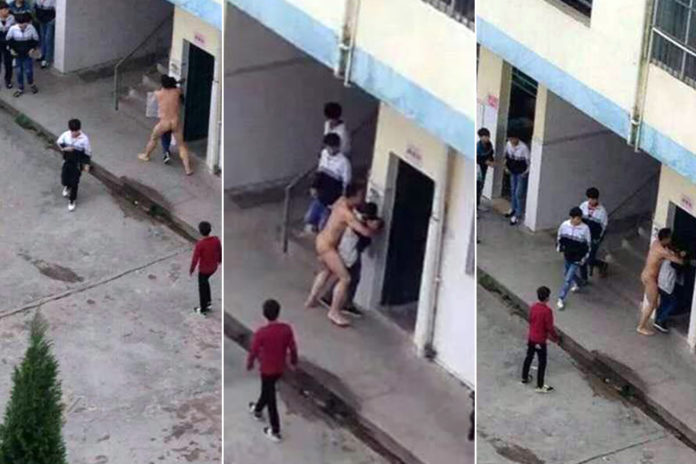 In a bizarre incident, a 30-year-old teacher stripped naked and tried to rape a female student in broad daylight, in full view of at least six other shocked students. According to Chinese media, Hou, a laboratory caretaker at Taiping Middle School in South China’s Guangxi province, tried to force himself on a teenage girl during the lunch break. As the victim screamed for help, other teachers intervened and freed the terrified girl. After the incident, the police were called; Hou was detained and was sent to the hospital for treatment. The traumatized student suffered no physical injuries. The Publicity Department of Lingshan County said Hou has a suspected mental illness and received treatment in 2011 for psychotic episodes, however after two years he was declared fit to return to work.

This article (Graphic Photos: Naked Teacher tries to Rape Student at a High School in China) is a free and open source. You have permission to republish this article under a Creative Commons license with attribution to the author and AnonHQ.com.