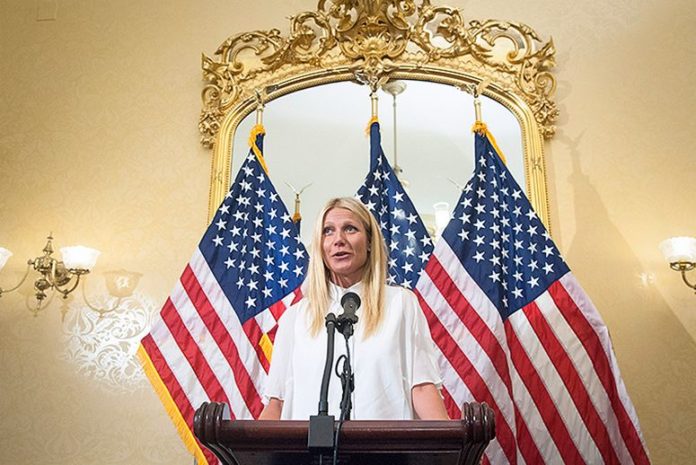 Throughout the years, quite a few celebrities have spoken out against Monsanto, and now both Gwyneth Paltrow and Neil Young have been making headlines for their recent battles with the agrochemical giant. Paltrow has joined the fight against the ‘DARK Act’ with numerous other celebrities, while Young is catching attention with his new album, “The Monsanto Years.”

This isn’t the first time Young has been in the news for his views on Monsanto, and in particular, Starbuck’s support of the corporation. Last November it was reported that he, and other celebrities, had begun to boycott the popular coffee chain.

In the meantime, Gwyneth Paltrow traveled to Capitol Hill to lobby against the Safe and Accurate Food Labeling Act, also known by opponents as the Denying Americans the Right to Know, or DARK, Act. This would prevent states from requiring GMO labels, and the bill was passed by the House of Representatives in late July.

Paltrow is one of many celebrities that have joined the “Just Label It!” campaign that is being mounted by a group of organic food companies working to defeat the bill in the Senate.

“Much the way I want to know if my food is farm-raised or wild or if my orange juice is fresh or from concentrate, I also believe I have the right, and we as Americans all have the right, to know what’s in our food,” Paltrow stated at a recent event marking the delivery of a petition to President Obama. “I’m not here as an expert,” she continued. “I’m here as a mother, an American mother, that honestly believes I have the right to know what’s in the food I feed my family.”

Many reports will tell you there is no proof that GMOs cause health problems while others tell you the opposite. For sake of argument, let’s put all of that to the side for a minute—there are a lot of other underlying issues here that aren’t being addressed.

For example, according to Charlotte Gerson, Founder of the Gerson Institute, and Professor Ian Brighthope M.D., one of the major problems we’re facing is the condition of the soil our food is grown in. Not only are the toxins we are putting into the environment soaking into our food, the soil itself has been so over-used that nearly all of the nutrients are gone.

Commonly used synthetic fertilizers (which are cheaper) are made up almost entirely of three minerals; nitrogen, phosphorus, and potassium. These are the minerals plants can’t live without, however fertilizers should contain approximately 52 different minerals. When the soil is deficient of these minerals, not only are we robbed of these nutrients, but the plants themselves weaken and lose their defenses, at which point they are attacked by insects and diseases.

Once their crops begin to die, most farmers complain to the chemical companies, and the chemical companies—being more than happy to sell their products—provide the farmers with growth stimulants, pesticides, fungicides, and anything else they can make a quick dollar off of instead of fixing the true source of the problem. Let’s face it—there’s no money to be made in finding cures or solutions.

Consumers everywhere are simply asking to know what is being put into their food. Considering how hard corporations like Monsanto are fighting this, you can’t help but wonder why. Weak arguments have been created against GMO labeling, such as that it would have negative financial effects, but most find these arguments ridiculous. While Cornell University’s study found that if states such as New York passed laws requiring GMO labels it would cost the average 4-person family an additional $500 a year, independent studies have found that food prices vary according to demand, not the ingredients.

This Article (Gwyneth Paltrow and Neil Young vs. Monsanto) is a free and open source. You have permission to republish this article under a Creative Commons license with attribution to the author and AnonHQ.com.