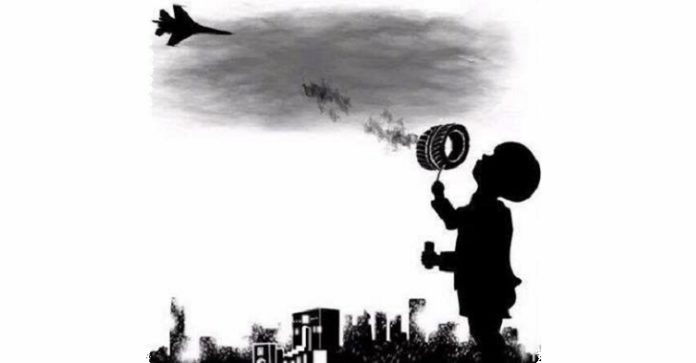 By Josie Wales at theantimedia.org

The skies above the Syrian city of Aleppo filled with smoke earlier this week as children burned tires to create a makeshift no-fly zone in a last-ditch effort to protect their homes. This heartbreaking act of desperation directly followed recent air raids, which killed at least 42 civilians and left dozens more wounded. Syrian and Russian government forces have been pummeling what was once known as “the jewel of Syria” with heavy fire for more than 80 consecutive days.

In that time span alone, at least two hospitals have been hit, and more than 6,000 people have been killed or injured — mostly civilians. Although rebels have been fighting back, the combined power and resources of the Syrian and Russian governments are thus far impossible for the rebels to match. Meanwhile, U.S.-backed rebels fighting against Assad in Syria recently beheaded a young boy on camera and have been suspected of a recent chlorine gas attack that killed five civilians, among other atrocities.

Aleppo has not become the heart of this five-year civil war by accident. Assad needs complete control of the country’s largest city to win this war, and it is obvious he is willing to kill as many innocent men, women, and children as ‘necessary’ to get it — but they’re not giving up so easily. The children’s burning tires were also meant to serve as a plea for help. According to The Independent, journalist Yasser Al-rahil, who is also a member of the Revolutionary Forces of Syria media office, said:

“Children in the city of Aleppo and its countryside have been burning tyres [sic] in attempt to relieve air strikes by obscuring the vision of [Syrian government] and the Russian war planes. It is also to send a message to the world that not enough is being done to stop the criminality and warplanes.”

They just want to be saved.The attacks on these cities with no concern for the hundreds of thousands of innocent people is horrific, but no one is saying a word. The United States government is outraged at the mere idea of Russia reading DNC emails but turns a blind eye to the mass carnage that country’s government has helped Assad inflict, even as the U.S. continues to fund the Syrian opposition — prolonging the civil war. Former foreign secretary and CEO of the International Rescue Committee, David Miliband, expressed concern over the deafening silence from the international community after the attacks on the hospital recently. On BBC’s Today, he said:

“It is not good enough to have monthly reports from the Secretary General about death and destruction…There is unspeakable humanitarian abuse going on across Syria at the moment and there is very little accountability for people committing these crimes. This is now not just a humanitarian catastrophe it has major political implications not just for the Middle East for also for Europe. Politics comes down to pressure and at the moment there is very little pressure on the Syrians, the Russians or frankly even the Iranians to curb the humanitarian abuse that is contributing to the conflict inside Syria.”

Unfortunately, it doesn’t look like the American government will be paying attention any time soon. Last week, while massive efforts were made to clean up the confetti and balloons left behind on the Democratic National Convention floor, grief-stricken Syrians were mopping up blood and disposing of limbs from the maternity hospital that had just been bombed.

This article (The Heartbreaking Reason Syrian Children Are Burning Tires in the Streets) is free and open source. You have permission to republish this article under a Creative Commons license with attribution to Josie Wales andtheAntiMedia.org. Anti-Media Radio airs weeknights at 11 pm Eastern/8 pm Pacific. If you spot a typo, please email the error and name of the article to [email protected].