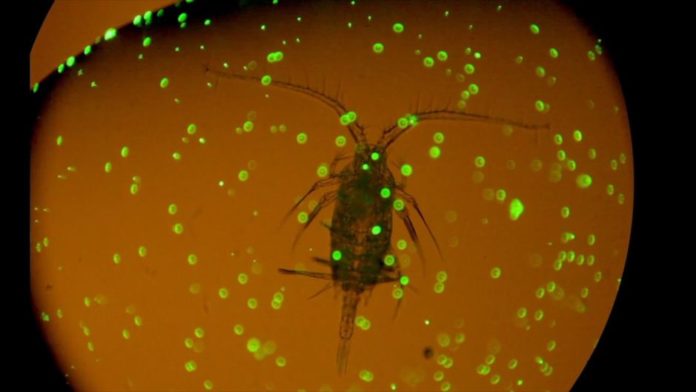 8 million metric tons of plastic waste being dumped into our oceans annually is not just reaching the digestive tracts of turtles, sea birds and whales; it is also clogging up the insides of plankton – tiny organisms that provide a crucial source of food to many large aquatic organisms.

For the first time zooplankton – the most common plankton that feed on algae in the ocean – have been filmed eating grains of plastic. Verity White from Five Films and her team captured the video under a microscope at the Plymouth Marine Laboratory in the UK. The footage shows zooplankton consuming and accumulating fluorescent polystyrene beads measuring 7 to 30 micrometers in diameter.

Plankton are eating plastic, which means we’re all also eating plastic. The video provides growing evidence that the volume of plastic litter finding its way into the world’s oceans is having a profound impact on wildlife and ecosystems. Research from 5 Gyres Institute points out that plastic pollution not only entraps or turns up in the stomachs of marine animals, these toxic particles pass on to us when we eat seafood.


“It’s not just the plastic that harms animals; the beads absorb toxic chemicals, making them poisonous to any creature that mistakes them for food or that eats another that has ingested the plastic—all the way up the food chain. Because humans eat fish and other animals, these toxins can end up in our bodies, where they can alter hormones and cause other health problems,” David Suzuki wrote about the scourge of ocean plastic.

The footage was shot for a short film titled “Ren Kyst – got a spare afternoon?” for the Ren Kyst project, an environmentalist movement that seeks to “clean up close to 40 coastline locations” in northern Norway. The film recently won the Atkins CIWEM Environmental Film of the Year.

This Article (Here’s Evidence That Seafood Lovers Are Munching Ocean Plastic) is free and open source. You have permission to republish this article under a Creative Commons license with attribution to the author and AnonHQ.com.