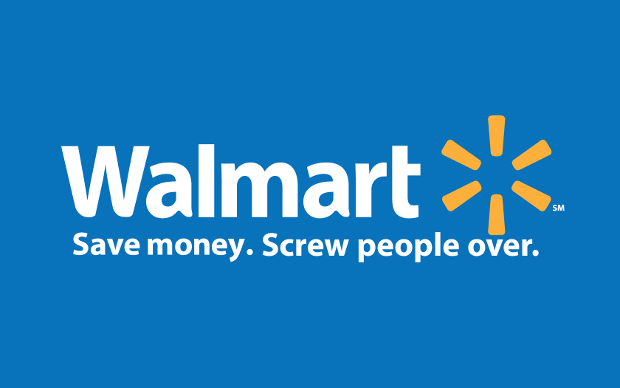 Los Angeles writer, Chris Osterndorf, has created a detailed list of the ways in which Walmart is the worst company in the United States, beginning with the mega-store’s stance on unions.

“Walmart and unions go together like oil and water.”

It should be kept in mind that corporations have been fighting unions for years, and today, Walmart is one of the largest corporations in the world. The retail giant is famously known for its anti-union policies, and as Osterndorf reports, they’re only getting worse. Here is a leaked Walmart training video that illustrates the propaganda used to keep their employees from organizing:

As quoted from the video:

“Our company prefers to have open and direct communication with our associates—we don’t think a labor union is necessary here. And because our associates have said time after time that they don’t want a union, we usually don’t spend a lot of time talking about them.”

According to Osterndorf, this all comes directly after Walmart shut down five of its stores for “plumbing problems,” which is an excuse many are interpreting as “union problems”. Walmart has been fighting the unions for quite some time.

According to historian, Eric Foner:

“In 1970, General Motors had been the country’s largest corporate employer. In the early twenty-first century, it had been replaced by Wal-Mart, a giant discount retail chain that paid most of its 1.6 million workers slightly more than the minimum wage. Wal-Mart aggressively opposed efforts at collective bargaining. Not a single one of its employees belonged to a union. Thanks to NAFTA (North American Free Trade Agreement), which enabled American companies to expand their business in Mexico, by 2010 Wal-Mart was also the largest employer in Mexico… Because of the decline in union membership and the spread of part-time employment, fewer and fewer workers enjoyed fringe benefits common in union contracts, such as employer-provided health insurance.”

Without a union, it was estimated by Forbes, that at one point, Walmart was receiving around 5,000 lawsuits a year from workers at both the Walmart chain and Sam’s Club. The major retailer has been sued for everything from gender discrimination, to false imprisonment—a charge filed by a group of illegal aliens, after routinely being locked inside the retail store during their shift. A union would eliminate these misconducts, and yet, in their employee orientation video, Walmart claims their associates don’t want one. Osterndorf points out that while it’s important to remember just how toxic Walmart’s views on unions are, it’s also important “not to forget all of their other equally problematic corporate policies. For Walmart, unions are just the tip of the iceberg when it comes to atrocities.”

Here is the in-depth list that Osterndorf has compiled. It outlines all the reasons Walmart is so awful.

One of the most well-known problems associated with Walmart, is the impact it has on communities. Additional evidence of this is provided in the 2005 documentary, Wal-Mart: The High Cost of Low Price, provided below.

When Walmart moves into a town, smaller mom-and-pop businesses are driven out. In addition, they’re doing little to nothing to bolster the economy of these communities. In a statement, from Jared Cram of Generation Progress, a non-profit organization that promotes progressive solutions to key political and social challenges through support for student activists and journalists:

“A study commissioned by the Los Angeles City Council in 2003 found that Walmart is a net loss for the communities it moves into. An influx of “big box retailers” such as Walmart was estimated to cost an additional $9 million in state health care costs and a loss in pensions and retirement benefits so large that the increase in public assistance necessary to make up the shortfall could not even be covered by increased sales and property taxes.”

Walmart receives an estimated 50 percent of their goods from overseas. This not only takes jobs away from Americans, the working conditions in some of these areas are abysmal. An example of this would be Bangladesh, where the minimum wage for garment workers is a mere $37 a month. In 2012, a fire in one Bangladesh factory killed 117 people, while another fire in 1990 killed 32.

Walmart has also been fined for child labor violations. According to a 2006 study from Harvard Law, these are the working conditions at one factory in Bangladesh:

“The children report being routinely slapped and beaten, sometimes falling down from exhaustion, forced to work 12 to 14 hours a day, even some all-night, 19-to-20-hour shifts, often seven days a week, for wages as low as 6 ½ cents an hour. The wages are so wretchedly low that many of the child workers get up at 5:00 a.m. each morning to brush their teeth using just their finger and ashes from the fire, since they cannot afford a toothbrush or toothpaste.”

In 2001, the case of Wal-Mart vs. Dukes, sought to improve wages and promotion policies for women who work for the retailer (yet another issue that can be addressed by a union); however, Walmart later won an appeal through the Supreme Court, which dropped the lawsuit. This now makes it harder for women who work for the corporation to break free from being “underrepresented and underpaid.”

Female Walmart employees make up 57 percent of Walmart’s U.S. workforce (Walmart employs more women than any other U.S. company), and they are paid $1.16 less per hour. In total, women earn $1,100 less per year than male employees in the same position. Females in positions that pay $50,000, are earning $14,500 less than their male counterparts.

The company has also faced multiple lawsuits from pregnant women who were put in dangerous situations; some were even fired for being pregnant. According to reports however, the Supreme Court is finally ruling in favor of pregnant women in discrimination cases, such as the case of Young vs. United Parcel Service. 5) It isn’t a safe environment for employees

It isn’t just employees overseas who are forced to work in unsafe conditions. Walmart only just updated its safety policies at 2,900 stores in 2013, after receiving violations from the Occupational Safety and Health Administration in New York State. The most publicized violation was the practice of night “lock-ins,” where employees were literally locked inside to “keep robbers out,” prevent employee theft, and ensure they remained at their jobs.

In a statement from the New York Times’, Steven Greenhouse:

The policy “has created disconcerting situations, such as when a worker in Indiana suffered a heart attack, when hurricanes hit in Florida and when workers’ wives have gone into labor.”

Walmart has apparently reversed this old-world policy, however, Osterndorf comments that this “doesn’t mean we should forget and forgive. And just because they have updated stores with better safety measures doesn’t mean we should let them off the hook for lacking in safety to begin with.”

6) The company is notorious for wage theft

Aside from paying poor wages, Walmart has been known to pinch additional pennies from their employees whenever possible. In an effort to save millions, the company has forced employees to buy new uniforms, when they very easily could have (and should have) paid for the uniforms themselves.

Many employees, such as a group from Pennsylvania who filed a suit against the company, are forced to work through unpaid breaks, meal times, and other instances when they were supposed to be off-duty. Matt Connolly from Mic.com, writes:

“Started in 2002 when a worker sued for unpaid wages, the case became a class action suit as other Walmart workers with similar stories joined in, culminating with a court decision ordering Walmart to pay $151 million to workers, plus $33.8 million in attorney’s fees.”

According to the New York Times, Walmart workers have been found to be, on average, sicker than most other American workers. This is due to the various steps the company has taken to provide cheaper insurance, which has resulted in plans that provide less care. Apparently, Walmart also used taxpayer subsidies to provide these benefits without addressing the most important question—whether or not Walmart pays its employees enough to afford health care at all (which it doesn’t).

The company cut its insurance benefits for part-time employees in 2014, and many have reported being advised by their managers to apply for low-income state medical insurance. Obamacare can provide coverage for some of the workers who lost their healthcare benefits, but those who live in conservative states reticent to accept government plans, are most likely out of luck. 8) Walmart has a bad track record on animal welfare

Reports suggest that Walmart is among one of the worst companies, when it comes to ensuring that it’s animal products come from livestock that is well-treated. What’s more, the company has been investigated for hosting cock-fighting matches at a Mexican branch in order to entice customers to shop there. 9) However, Walmart does care about rich people

The Walton family received $8 billion in tax breaks in 2013, $6.2 billion of which came from the federal taxpayer subsidies they received because their employee wages are so low. Walmart also has $21.4 billion in offshore accounts, which remain untaxed by the U.S. government. And finally, while the company failed to meet shareholder expectations in 2014, they were still somehow able to give their CEO a $1.5 million bonus for performing his job poorly. 10) The chain has a deceptive public image

Walmart’s negative reputation is universal. Even those who are unfamiliar with the details of their malpractices have, at least, heard of the controversy that surrounds this particular establishment. To add insult to injury, the company continues their OUR Walmart initiative to silence dissenters with positive representations, rather than actually fixing the problems or running the company with the slightest hint of dignity.

As the Walmart Foundation’s initiative is to “fight hunger,” they’re own employees go hungry, spending $300 million in taxpayer money on food stamps. Then of course there’s the “buy American” campaign, when the company has their uniforms made in Jordan.

“This is just a friendly reminder that Walmart is terrible. Call it a public service announcement: Don’t shop there. Don’t work there if you can help it. And if you do have to work there, don’t expect to be treated well. Get out while you can, before Walmart takes your spirit, your health, and your dignity.”

“If Walmart’s ugly practices are a cycle of power and abuse, there’s only one way to break it. And that starts with you.”