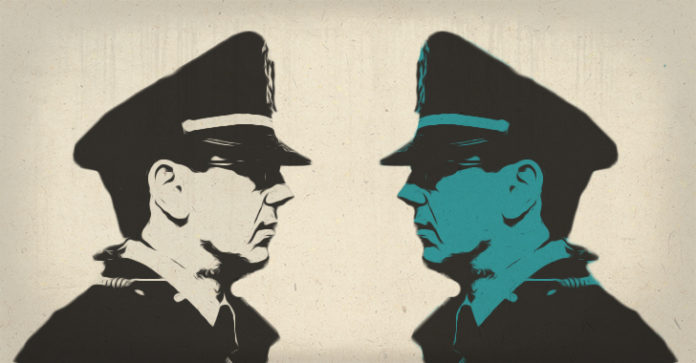 Headlines and social media posts attest an inexcusable escalation in instances where law enforcement’s use of brutal tactics or lethal force are alarmingly unwarranted. In fact, the reality that police regularly inflict indiscriminate violence with blatant impunity has exhausted any expectations of justice for family members of countless victims. With numb cynicism, a sardonic common theory concludes that good cophas to be an oxymoron—because if there were any good cops they would arrest the rotten ones . . . right?

As a theory, that scenario works surprisingly well. But it ignores two interrelated points of considerable weight—and the first might shock you, so brace yourself. Good cops aren’t just a fairy tale—and they are everywhere. However, the reason the corrupt cops aren’t being arrested in droves or having their crimes exposed isn’t for lack of effort. For Lorenzo Davis, holding police accountable was in his job description—until he ran headfirst into the Blue Wall of Silence for trying to do exactly that.

As former supervisor of the Chicago Police Department’s Independent Police Review Authority (IPRA), Davis was tasked with investigating the department’s shooting incidents with an impartial eye to determine if they were justified. In eight years of shootings, as Davis told the Daily Beast, he discovered six cases where no possible justification existed for the officers involved to have used a firearm. Tragically, three of those “bad shootings”—police jargon for unjustified officer-involved shootings—cost people their lives.

But Davis’ findings were never made public.

Instead, his boss at IPRA, Scott Ando, ordered him to falsify the report in order to eliminate any police culpability. When Davis flatly refused to follow his boss’s orders, he was fired and even accused of “anti-police bias”—despite having been with the Chicago Police Department for 23 years. In fact, IPRA has only found wrongdoing by one officer in probes of nearly 400 police shootings since the agency’s inception in 2007—though Davis estimates about 5% of the shootings investigated are problematic.

Ando took over as IPRA director in 2014 after almost 30 years with the DEA, but Davis said that between Ando, the police department, and the police board, supervisors are routinely overruled when they find incidents are unjustified. The previous director assigned police shooting investigations randomly to one of 12 supervisors, but just before firing Davis, Ando hand-selected a single supervisor to oversee all of those investigations.

Ando tried to rope IPRA employees into signing a non-disclosure agreement, but investigators didn’t sign based on union policy. Though supervisors had the option, Davis refused since he believed IPRA policy and procedure“should be public.” His integrity, honesty, and dedication to ethical standards in policing are laudable, partly due to their rarity. That is a striking indicator of where standards could be headed, considering such integrity was an expected aspect of policing just a few decades ago.

However rare a cop like Davis may be, he isn’t the only one—but the Blue Wall of Silence is working to ensure they are a diminishing breed.

Corrections officer John Pisciotta was 3½ years into his job at Florida’s Charlotte Correctional Institution in May 2008 when he was part of an extraction team tasked with removing an inmate who had barricaded himself in his cell. This particular extraction would change his entire perception of the unofficial Blue Wall doctrine of prison employees: “We Never Walk Alone.”

Kelly Bradley suffered from schizophrenia and was housed in Charlotte’s psych ward when he barricaded himself in his cell using his mattress. Pisciotta and four other officers in riot gear breached Bradley’s makeshift blockade and found him hiding in fear under his blanket—certainly not a threat to anyone. As they shackled his wrists and ankles, Officer William Hamilton Wilson dug his finger into Bradley’s right eye socket with such force his eyeball came completely out—and he did it intentionally.

Captain Scott Anderson called the team to his office after the incident and told them not to even mention the eyeball injury in their write-up of the extraction. All of them complied—at least at the time. Pisciotta was so unsettled by what had happened and the instruction to cover it up that Anderson asked him, “Are you OK? You’re making us all a little nervous here.”

But he wasn’t OK at all, so he went to the Department of Corrections Inspector General’s office to give a statement about what had really happened. Almost immediately, he realized the reality of that unofficial doctrine and how similar it is to the Blue Wall. “I just couldn’t live with myself if I didn’t tell the truth,” he said. “I knew that it was morally wrong. They wanted us to prepare statements and not say anything. I told them I just couldn’t go along with it.”

Wilson was arrested for aggravated battery, and his arrest affidavit—which included the fact that Pisciotta was a witness—was emailed to 19 guards. And the harassment began in earnest. COWARD was spray-painted in black on the side of Pisciotta’s house, his transmission wires were snipped, and his fender was damaged. A female officer he’d been briefly involved with went so far as to falsely claim she’d seen Pisciotta assault an inmate.

Wilson was eventually found guilty of civil rights violations and served five years in federal prison; but he was theonly one of the six ultimately involved that day to even face criminal charges. Even more incredibly, four were promoted.

Pisciotta and his wife faced so much harassment they ended up selling everything they owned and then moved to Vermont. Like Davis, he was fired—essentially for having the integrity and courage to speak out against his fellow officers.

Law enforcement’s nefarious code of silence might not be writ doctrine, but officers consider it the ultimate bond of brotherhood—and breaking that code can have grave consequences. This culture, this club of Good ol’ Boys, makes accountability an almost impossible dream for victims’ families.

Perhaps until there are more sweeping reforms of the [in]justice system and law enforcement, cops who want to speak out but fear what could happen to their families need a way to do so that can guarantee their protection. An anonymous reporting system for police whistleblowers that includes lawyers, sympathetic current and former law enforcement officials, technology experts, and others would benefit not only the cops coming forward, but victims and their families.

Standing up for what is right should be lauded, not punished as it is now. Until the system can be overhauled, perhaps finding ways to subvert what’s available would be of enormous benefit to all of us.

This article (Here’s What Happens to Good Cops When They Stand up to Bad Cops) is free and open source. You have permission to republish this article under a Creative Commons license with attribution to Claire Bernish andtheAntiMedia.org. Anti-Media Radio airs weeknights at 11pm Eastern/8pm Pacific. If you spot a typo, email[email protected].