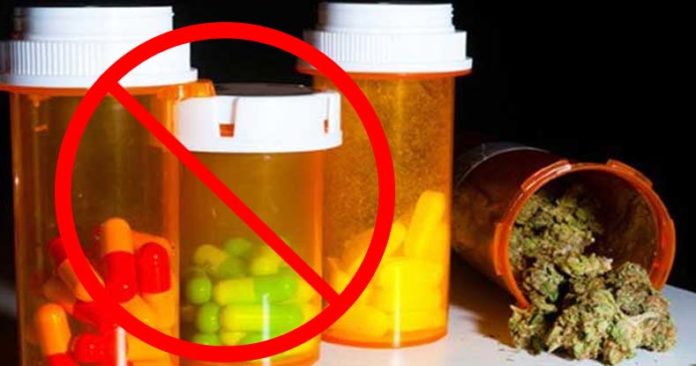 #Pot Helping Seniors Get Off Prescription Drugs https://t.co/jtbKnLA1LF #Cannabis can help our grandparents too! pic.twitter.com/bhNgcCvQRH

The finding that cannabis was substituted for all three classes of substances suggests that the medical use of cannabis may play a harm reduction role in the context of use of these substances, and may have implications for abstinence-based substance use treatment approaches. Further research should seek to differentiate between biomedical substitution for prescription pharmaceuticals and psychoactive drug substitution, and to elucidate the mechanisms behind both.

According to the 2015 National Drug Threat Assessment, drug overdose, mostly from painkillers and heroin, is now the leading cause of fatal injuries in the US—surpassing firearms and motor vehicle accidents. Prescription opioids and heroin overdoses constitute two of the top drugs people overdose on not just in the United States, but across the world.

“Right before I came to Washington to become Surgeon General, I was saying goodbye to our team of nurses in Boston. And they had a request for me. They told me that if I did just one thing as Surgeon General, I should do something about the drug crisis in America. I promised them that I would. I promised them that I would because they knew it was destroying too many of our communities.

“…I’m proud to announce that next year, I will be releasing the first-ever Surgeon General’s Report on substance use, addiction, and health. We’re going to look at the best science on everything, from heroin and marijuana, to alcohol and prescription opioids. And we’re going to launch a national campaign to tackle the prescription drug crisis, because we know that someone dies from an opioid overdose every 24 minutes in this country.” Strong case for medical cannabis. Weak case for prescription pills. Isn’t it reason enough for Big Pharma to lobby against cannabis legalization? After all, if people move away from dangerously addictive and deadly substances in favor of a miracle plant, how will they jack up the costs of drugs, fleece patients, generate profits and thrive? There are at least five prescription medications that could be replaced by cannabis. And if they indeed are replaced, cannabis would immediately render obsolete the gamut of pharmaceuticals that make the drug barons (and lawmakers) filthy rich.

No longer would the general population need to rely on side effect-laden painkiller drugs, psych meds and other deadly pharmaceuticals for relief from their chronic ailments — cannabis would replace all this and more, providing true healing to the masses for pennies on the dollar. Because cannabis is a plant that anyone can grow, it also threatens the centralized power structures that control modern medicine, not to mention the for-profit prison industry that banks on incarcerating non-violent drug offenders.

The disturbing history of why marijuana is illegal in the U.S…(ATTN: is excited to launch Episode 5 of our new series about the history of illegal drugs)

This Article (Here’s Why Big Pharma Lobbies Against Cannabis Legalization) is free and open source. You have permission to republish this article under a Creative Commons license with attribution to the author and AnonHQ.com.