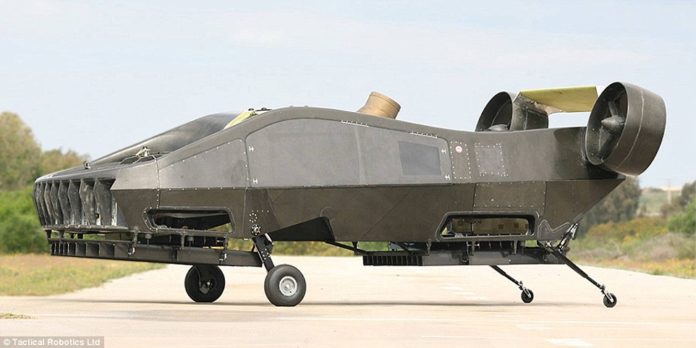 An Israeli Aeronautics firm, Urban Aeronautics, recently announced to the press that their “Cormorant Drone,” which has been named after the aquatic bird, successfully passed through yet another major milestone. This milestone achievement allows the drone to fly itself over uneven terrain. The company building this new drone has also reported that the 1,500-KG drone is also able to transport a load of up to 500kg for a distance of 30 miles, all while capable of reaching speeds up to 185 km/h. This drone can also reach altitudes of up to 18,000 feet.

This drone is approximately equal to the size of a car. It has been formerly known as the “Air Mule,” and this drone has been in the development stages for 15 years. The sole purpose of this drone is search and rescue missions, mostly intended for the aftermath of a major disaster. But other applications, such as being an unmanned aircraft first aid air transportation in the battlefield, is also on the agenda. It can be utilized for cargo transport, and moving troops in and out of places where planes and helicopters aren’t able to fly. However, unlike other traditional aircraft, this drone is neither a plane nor a helicopter.

The drone possesses internal rotors and duct fans that are housed in the shields, helping prevent damage. This allows the craft to take off and land vertically. Other practical uses of this application include the ability to “dart” around in a variety of directions once the craft is airborne.

The representatives of the company have made claims that this drone’s unique abilities will soon allow this drone to fly between buildings, and even under power lines. Another great potential of this drone is its ability to travel into contaminated areas covered in chemicals or radiation.

Another fascinating feature is its ability to be piloted manually, by means of a remote-control operator; the drone can also fly autonomously. In which case, the company representatives state how this will allow split-second decisions, regarding the successful completion of a mission. The respective company believes their drone will eventually become the new line of “workhorse,” whereby it can regularly deliver supplies to difficult-to-reach areas, including carrying to ships out at sea. However, the first thing the company must do is to iron out the technical issues revealed during their testing of the navigational sensors. The company will also need to modify their craft to properly meet the government aviation certification standards.

Urban Aeronautics is also rumored to be developing a much smaller version of this drone for the use of private citizens – for personal flying cars. However, that said adventure wouldn’t commence until the company sells and delivers the Cormorants to their customers. The company is expecting to sell these drones by 2020 for a lazy $14 million each.

This article (Human-Carrying Drone Passes Another Milestone) is a free and open source. You have permission to republish this article under a Creative Commons license with attribution to the author and AnonHQ.com.