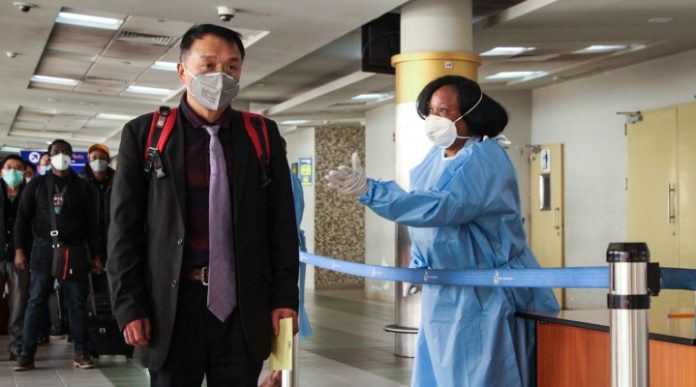 As new cases of the novel coronavirus continue to emerge across East Asia as well as in Europe and North America, another pandemic with possibly more deadly implications has also swept across the globe: the revival of shockingly racist and vile sentiments targeting people of Chinese and East Asian descent in the form of false news reports and general hysteria.

On Thursday, the phenomenon took a heartbreaking turn when a Chinese man collapsed and died from a heart attack in Chinatown in Sydney, Australia. According to reports, onlookers ignored the 60-year-old man as he suffered, refusing to give him CPR and leaving him to die on the sidewalk out of fear that they would catch the coronavirus, according to the Daily Telegraph.

And while the coronavirus reportedly originated in Wuhan, China, those far removed from the outbreak are feeling the devastating impact of the aggravated racism toward Asians.

“An older man called me a ‘dirty Chinese [expletive].’ A guy who looked like a high schooler got in my face and told me to ‘get lost.’ I really lost it for a moment when a homeless person walking down the street even called me a [derogatory word for a woman].

Even when I explain I’m Korean, people tell me that all Asians should leave. I’d been afraid this might happen, but experiencing it personally has shown me how hard it is to bear such hatred. It makes me afraid to go to crowded places.”

“When I was coming out of a sports stadium in downtown Paris, a boy made fun of me by shouting, ‘Here comes the coronavirus.’”

The complaints come amid an outcry over a headline published last week in local newspaper Courrier Picard that read “Alerte jaune” (Yellow alert) and “Le péril jaune?” (Yellow peril?) alongside an image of a Chinese woman in a protective mask, harkening back to a racist early 20th-century concept of the so-called “Yellow Peril” pitting the so-called “civilized” white, Western world against the alleged “threat” posed by the peoples of the “orient,” or eastern Asia.

The alarming rise in overt racist abuse across public transportation and social media in France has led to many Asians taking to social media using the hashtag #JeNeSuisPasUnVirus—or “I’m not a virus.”

From Toronto to even as far as San Diego, Chinese-owned businesses have been sharply impacted. Even across Latin America, seemingly harmless memes about catching the coronavirus from Asian retailers like Chinese variety store Miniso or Korean counterpart Mumuso reflect the irrationality that has gripped the masses.

Every asians are not chinese, every chinese people isn't affected by the virus you fucking racists #JeNeSuisPasUnVirus

And while many scientists believe that there is a nexus between the coronavirus and animals, with many of those infected having worked in or shopped at a large meat market in Wuhan, a number of uneducated assertions and racist jokes have conflated the diets of Asians and Chinese with the outbreak.

In one clip posted to Twitter by the anonymous user @FreeMindHK, an Asian man can be seen eating live baby mice along with the caption:

“Chinese ‘delicacy,’ probably one of the causes for [the] emergence of #WuhanCoronavirus Source: telegram.”

However, Chinese social media users, including one who claims to reside in Wuhan, deny that live mice is a so-called “delicacy” and have also pointed out that there is nothing in the video that identifies the man as Chinese.

In my Chinese moms chat group, we discussed how to brace ourselves and the kids for the inevitable wave of racism coming our way as this unfolds.

Many of us have never even been to China but know we will not go unscathed. https://t.co/hz7YCPjyb5

As James Palmer wrote in a widely-shared article for Foreign Policy magazine, while many Chinese people have a taste for dishes that seem abhorrent in the West—including exotic and wild animals believed to have medicinal properties, which the government has attempted to clamp down on in recent years—such tastes are hardly the norm. Indeed, as Palmer notes, many inside China joke about the Cantonese dietary habits of eating “everything with four legs save the table and everything that flies but the airplane.”

Regardless, social media users—including commenters on posts by the Mind Unleashed—have been quick to point to groundless rumors, anecdotes, and social media posts to revive decades-old racist tropes about the “bizarre” and “disgusting” diets of Asian and Chinese people, or their supposedly “uncivilized,” “un–evolved,” and “horrible” culture.

Dear the people of China,

Yours sincerely, The rest of the world.#coronarovirus

But while scientists are still struggling to find a cure for the coronavirus, there is an obvious cure to the shocking revival of anti-Asian discrimination across the West.

Whenever we see inaccurate stories or see racist tropes being trotted out in response to the virus, we should call this out for what it is: blind bigotry and ignorance that can result in tragedy for completely innocent people of Asian descent—including our friends, neighbors, and family members.

This is why people don't take you seriously. "I, as American, don't eat bats, therefore everyone else who does should stop because I, as an American, dictate the culinary culture of all of the planet." Your self centered vantage point is myopic and immature.

I really hate this. pic.twitter.com/yeF4M0GNzr