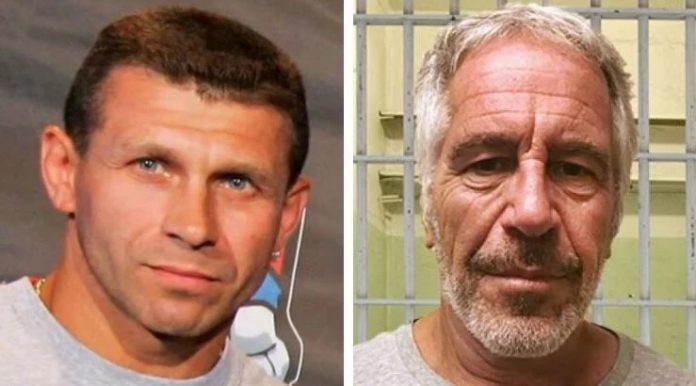 Jeffrey Epstein’s former bodyguard and driver has backpedaled over 2015 comments he made to former Daily Beast reporter M.L. Nestel, at one point suggesting he drop the story and stop asking questions about Epstein’s pedophilia.

Nestel, now with New York Magazine, was able to reach the former UFC fighter, Igor Zinoviev, who was happy to answer questions about shuttling Epstein around Palm Beach and training the ‘pretend billionaire’ via workouts and light martial arts, the Russian MMA competitor clammed up when the topic shifted to Epstein’s crimes.

You were Jeffrey Epstein’s driver? You weren’t just his bodyguard and trainer?

You drove him in all three places?

You worked with him and traveled with him 24/7 — so that means you were on his plane with him, correct?

You lived in his guest house?

Now things get uncomfortable as Zinoviev backpedals on statements he made in 2015.

In our conversation in 2015, you described his relationship with teenage girlfriends: “So many time I tried to stop him. I try to tell tell him my opinion about that. He don’t listen to me. That’s the reason why I’m not working for him no more. I make him do that — to let me go.” Do you remember saying that?

Plenty of times when I work for him I never see anything unproper or teenage girls around him.

That’s what I say.

All what I say he has always been with girlfriends and therewas a couple girls — I don’t remember their names. She was 25 and worked for him as assistant. Maybe 25 or 23 — whatever, I don’t know the age.

Okay. But you definitely told me that last time we talked.

No, no. It’s not that. He working like work-release on other stuff. And I just tell him, you know, he would order his girlfriends around, and I told him, “Calm down.” It’s not just teenage girls.

Here’s another thing you said last time about Epstein and the girls you saw at his house — specifically about moments when you were trying to offer him advice about his conduct: “Sometimes he tries to make a joke. He’d say, ‘Thank you, Grandma. I don’t need your opinion.’ So when you tried to do something good, he would try to make a joke in front of his girls. I never give anyone any questions. It’s one of my rules actually. I be honest with you. I never ask any of my clients what they do for a living or how they do whatever they do. I just do my job, and that’s it.”Do you remember saying that?

Yes, that’s what I say. I feel like the cops watching me whenever he’s on work release — I tell him, “Don’t do stupid stuff.” Like, “[Don’t] put your girlfriend in the car and drive together.

Don’t! Watch it out — all the extra attention.”

Epstein made fun of you in front of the girls, right?

Yeah. Yeah, that was his thing, yeah.

You said you never ask your employers questions.

Yeah. That’s normal answer. People like him just do whatever he wants to do. Because like people talking and just — they already have some release and I understand and just read some papers about his like, whatever, “teenage girls.” But that was [how] he answers. That’s it. So I don’t know.

Here’s another quote from our last interview:“He had a couple girlfriends. They have no idea the degree of what they are doing. But you can’t tell nothing to them. Because they support him kind of. For the while, this one girl can be more attached to him, he just fire her. Fire them and keep them away. For example, I give you some idea: You have private plane and you have three girlfriends and one girl can be more attached to him. And next week — he don’t take that girl. He takes another one, and he just switch them. He brings them on a couple trips and then get different girls. That’s what he doing.”Remember that?

I understand this is sensitive —

It’s not sensitive — it’s just — kind of a little uncorrect.

It’s exactly what you said. I can send it to you. Here’s something else you said: “It could be tricky you know. Normally he always checks his newspapers — ‘Nothing about me?’ I say, ‘No!’ He say, ‘They forget about me?’” And when I mentioned Epstein was being exposed for messing with teenage girls, you said: “I’m not surprised at all. I’m just surprised how low he can be outside the real world. Someday is going to call him and it will be real jail. He have so much money he can pay it off. Me personally, if I caught him with my daughter or something do that — I’m not going to go to police. I do something else. Much worse. That guy could try to sue me and manipulate the situation with his money. That’s the American way. I know he screwed up a lot of fashion girls also. That’s a different story. [Laughs.]”Do you remember saying that?

I remember one thing: I say like, “If I be the father and somebody screw up my daughter, I don’t give shit with how much money he have. I definitely do some bad thing.” That’s what I said. Before that stuff, I don’t know. I’m just really like —

Igor, I’m not making stuff up. I was very careful.

It was four years ago. You may not remember what you told me. I kept very good notes of what you and I said. It must come across as very harsh. But it’s the truth. I’m happy to understand a little better. He’s not alive. You don’t have anything to be afraid of anymore.

I’m not afraid. Beyond that just he is dead. I don’t want anything to be uncorrect. There’s too much shit in here, you know, already. He’s dead and just like, freaking people, just leave him alone.

Hold on. When did you find out he died?

Saturday or Sunday or whenever.

What did you think when you found that out?

What did I think?

Are you sure you want to hear what I am going to think?

Somebody helped him to do that.

You think somebody helped him kill himself?

Listen, you know, that’s going a little too deep.

I mean, I’m just trying to understand that maybe you’d be happy he was dead or you would be upset. I don’t know. Are you even feeling anything?

I’m not sad. I mean, I didn’t have anything against him, like a bad thing, you know? I don’t care about his life completely. I don’t give a, let’s say, like, crap about how he die, how he live, or how he’s managed.

How many years did you live at his house?

You don’t have any emotion after learning he’s dead?

Did you think that would happen to him?

Listen, what you say is between you and me —

You told me he would get phone calls the night before and eight o’clock the police are going to come. He would get a heads up from local police.

You told me that, Igor. Want me to read the quote?

Well, you can read whatever you want right now. Don’t just — you can put yourself in big trouble.

You said: “He always do something wrong. There was some nights in question. There was at home arrest and police, before they come to the house, they call him and tell him they coming in at eight o’clock in the morning. It’s all corruption you know. It’s all bullshit.”

We talked about this.

I understand we got this.

I’m telling you to give you a chance to remember because we talked about this stuff. I know it’s hard. I don’t know what you mean about “put myself in trouble.”

Why is it so important? Are you worried about the local cops?

What do you mean by that?

You said that last time. And we didn’t talk for years. You can tell the world who this guy was. You were with him for a long time. You know what I mean?

I totally understand that you think he could have had help committing suicide.

First of all, I have to go right now. I have another client.

Yes. But just be careful. I’m not kidding.

What’s your email so I can send you —

Don’t do any kind of that stuff. Just don’t play it. Seriously.

Can you tell me why?

May I ask you one more question?

Have you been talking to anyone in the government, the FBI? Have they come to you?