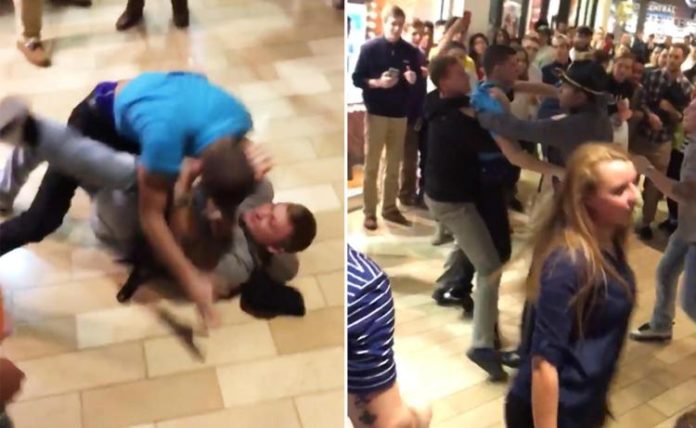 Chaos struck at least 15 shopping malls across the United States as bargain-hungry shoppers engaged in mass brawls and food-court fights on the post-Christmas shopping day.

Though the size and pervasiveness of 2016’s brawls is unprecedented, mall mayhem before, during, and after Christmas is not a 2016 phenomenon. The truth is, violence in America never takes a holiday.  On December 26, 2015, approximately 1000 teenagers and around 1000 individuals in their early 20s caused a 2-hour long massive chain reaction brawl at St Matthews Mall in Kentucky, forcing the entire mall and surrounding businesses to shut down.

Up to 1,000 teenagers showed up at the Monroeville Mall in Pittsburgh on the day after Christmas, in 2014, and got into a series of fights forcing the police to close the mall early. The same day, police were called after more than 100 feuding teenagers disrupted post-Christmas shopping at the Independence Center Mall in Missouri.

They shooting in Beachwood Mall tho… ??? pic.twitter.com/MNBEes9GIp

hulen mall wild for this one lmao pic.twitter.com/4rD4ZO5h1H

Fight breaks out at Newport Mall in Jersey City ?? pic.twitter.com/DXYtUfwoX0

This article (ICYMI: Countless Mass Brawls Bring Down Malls Across the United States [VIDEOS]) is free and open source. You have permission to republish this article under a Creative Commons license with attribution to the author and AnonHQ.com.