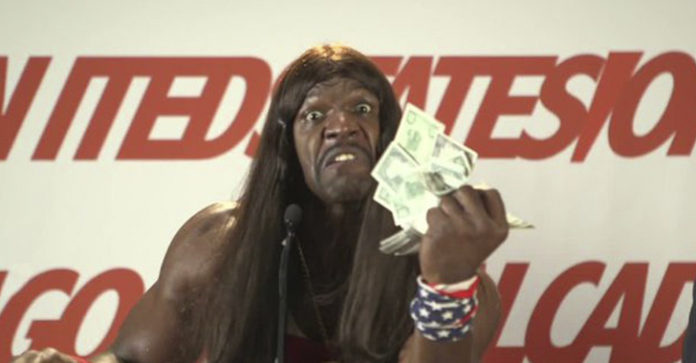 For years, fans of the 2006 cult film Idiocracy have lamented society’s drift toward the fictional reality in which farmers and leaders water their crops with sports drinks but can’t figure out why they won’t grow.

I never expected #idiocracy to become a documentary.

Now, Mike Judge, the film’s director, has weighed in on the growing similarities between his satirical, dystopian United States set hundreds of years in the future — and present-day America. In the film, an “average Joe” from the Army participates in an experiment gone wrong that leaves him hibernating for centuries. When Joe Bowers awakens, he learns the intelligence of the general population has deteriorated so severely that he is one of the most intelligent people alive — so intelligent, in fact, that he is celebrated for suggesting people use water to nourish their crops.

Judge, the creative mind behind Beavis and Butthead, Office Space, and HBO’s Silicon Valley, told the Daily Beast “it’s a tad bit scary” how closely the film and real world now parallel each other.

“Three or four years ago, I started getting comments about it, people discovering it, and it just keeps building. Now every other Twitter comment I get is about Idiocracy, and how it’s a documentary now,” he said.

He even pointed to specific instances where life is imitating art, not just in America, but around the world.

“At first, I was just thinking, yeah, that’s nice to hear, but then very specific things, like Carl’s Jr. announcing that they were going to have a completely robotic, non-employee store — and it’s Carl’s Jr. in the movie.”

“And then Donald Trump being in the WWF [World Wrestling Federation] before, and talking about his penis size. It’s just one specific thing after another!” Judge continued, linking the Republican front-runner to the film’s President Dwayne Elizondo Mountain Drew Herbert Camacho, the ex-porn star and five-time wrestling champion who leads the futuristic United States.

In fact, earlier this year, Judge and Cohen planned to produce a series of spots with Terry Crews, who played Camacho, to subtly criticize Trump.

As the Daily Beast noted, “they were simply waiting on 20th Century Fox, which owned the rights to the film, to sign off on the ads.” But as word got out that the spots were intended to mock The Donald, Judge says the project “kind of fell apart.”

“I wanted to put them out a little more quietly and let them go viral, rather than people announcing we’re making anti-Trump ads. Just let them be funny first. Doing something satirical like that is better if you just don’t say, ‘Here we come with the anti-Trump ads!’ Also, when Terry heard that announcement he wasn’t happy about it,” he said.

When Daily Beast reporter Marlow Stern suggested notoriously right-wing Fox News might not have approved of the message, Judge replied, “Yeah. That’s the other thing. I think there was a roadblock there, too. I just heard that they were put on the shelf, so it looks like they’re not going to happen.”

Though America is still a few years off from watering its crops with Gatorade — because electrolytes — the 2016 election continues to confirm Americans are struggling to maintain their intellectual (and moral) integrity.

“It’s surreal. I didn’t want Idiocracy to get popular by the world getting stupider faster. I guess I was 450 years off! But yeah, it’s a tad bit scary!” Judge added with a laugh.

But as Donald Trump, his supporters, Hillary Clinton, and the characters in Idiocracy might say:

This article (Idiocracy Director: It’s Kind of Scary How Quickly the Movie Became a Documentary) is free and open source. You have permission to republish this article under a Creative Commons license with attribution to Carey Wedler and theAntiMedia.org. Anti-Media Radio airs weeknights at 11 pm Eastern/8 pm Pacific. If you spot a typo, please email the error and name of the article to [email protected].