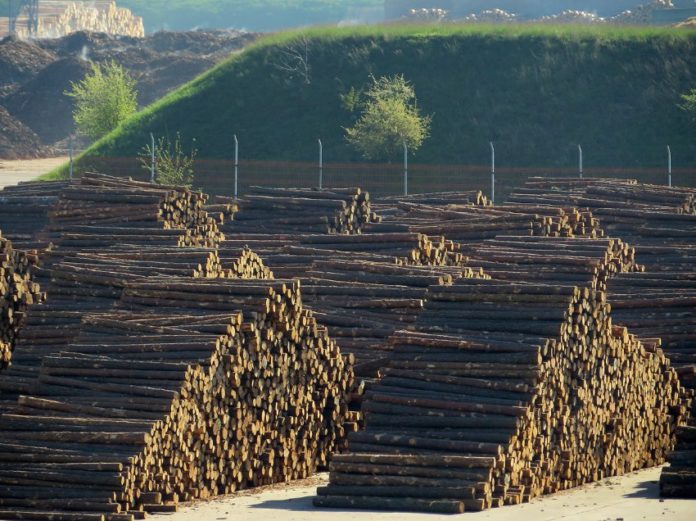 Illegal logging in Romania is threatening one of Europe’s most beautiful forest areas in the Carpathian Mountains. The lumber being harvested is thereafter sold to make flooring or heating pellets for German and Austrian DIY stores.

Gabriel Paun, an activist with the Romanian organization Agent Green, has first-hand witnessed this crime and ultimately suffered a harsh beating. The incident occurred when one night Paun followed a truck loaded with lumber after the vehicle left the Retezat National Park, located in the heart of the Carpathian Mountains. After some further investigation—using a hotline created to check the origins of lumber transports from the trucks licence plate—he discovered that the lumber was illegal.

The truck later arrived at a sawmill which belongs to the Austrian Schweighofer Group. Unfortunately, upon informing the security of the sawmill that the lumber was illegal, he was met with fist blows and pepper spray. This incident was captured on video and was later uploaded to YouTube. Since, the clip has gained much attention and has become a symbol for the Romanians’ concerned for their forests.

Despite the grievous crimes committed by the company, they continue to dominate over Romania, causing havoc on the environment, wildlife, culture and country’s economy. To date, the company’s reputation has remained unscathed; a few months back Schweighofer was honoured as the ‘investor of the year’ in Romania.

The Carpathian Arc contains the largest contiguous forested region in Central Europe. Although approximately 29% of the country’s total area is covered by forest, 51.9% of which is located in mountain areas,  the country is seeing its forested areas vanish. According to a 2012 study released by Greenpeace, forest areas equivalent to the size of three football fields disappears every hour. The Romanian government has estimated that roughly 4 million cubic meters (141 million cubic feet) of lumber is illegally harvested every year.

These regions are home to a variety of species including brown bears, wolves and lynxes. The illegal logging not only threatens these species existence in the region, but also threatens the existence of one of the last virgin forests in Europe.

The Greenpeace study also revealed that deforestation dramatically increased between 2000 and 2011. During this period Austrian wood processing companies like Egger, Kronospan and Schweighofer had moved to Romania and processed to dominate the market— with Schweighofer gaining the most success. In 2013, the company reported sales of €465 million ($519 million), with profits €96.5 million.

In 2013, “the government auctioned off a large of the lumber in natural forests on the basis of 10-year contracts,” of which mostly large companies like Schweighofer, successfully made purchases. Thereafter, Schweighofer was always served first during auctions and “They always had priority because of their contract and selected the best wood at the lowest price.”

The companies’ unmatchable success and the unusual rise of the price of wood in Romania—a price which was otherwise declining worldwide—ultimately led to thousands of Romanian custom furniture makers to declare bankruptcy. This has left many Romanians feeling crushed and has sparked protests in the streets, including outside the gates of the same sawmill Paun was attacked.

Since the collapse of the Eastern Bloc, roughly 4000,000 hectares (6 percent) of the entire forested area of Romania has been illegally logged. So far, even since Social Democrat Doina Pana – and then minister for water, forests and fisheries introduced the wood tracker hotline, nothing has been proven.

In April this year, the Environmental Investigation Agency (EIA) released a video exposing the leadership of Schweighofer “willingly and knowingly accepting illegally harvested timber and incentivizing additional cutting through a bonus system.”

In the video the EIA investigators pose as “foreign investors who had acquired the rights to cut a specified amount of timber on land owned by communities in Romania.” On numerous occasions the EIA investigators said they were intending to exceed the amount harvested lumber permitted in their contract and therefore needed assurances from Schweighofer that the company would purchase the illegally acquired wood. In every case, Schweightofer officials confirmed that they would indeed buy the wood, and offer a bonus for the additional wood delivered.

Fraudulent methods are often being used to cover many of the illegal logging cases. Activist Paun believes that these methods were used to erase the story surrounding the illegal truck he followed. This is because, after the incident, it was later reported that the truck was actually officially legal even though the truck was not registered in the system. “The papers were not in order here and dubious companies clear-cut trees in the national park, although Schweighofer claims on his website that he accepts no wood from such sources,” he says. “This audacious consumer deception has so far been ignored.”

Fraudulent ownership documents have also been discovered by officials within the lumber industry.  Currently, the  Romanian anti-corruption agency DNA are investigating a case in which “forged documents connected with a community forest in the Carpathian region of Valcea that was nationalized under the communists and transferred back to the original owners after the old regime crumbled.”

Of these cases, many have been investigated by detectives. Forensic reports of these documents later revealed that a group of amateur counterfeiters had forged the documents. Maps had been plainly manipulated and, in some cases, earlier pens had been used when forging older original documents. Despite there being clear evidence which suggests Schweighofer has also used this technique to purchase land, Schweighofer claims to have no information of the forged documents or forensic reports.

Although Schweighofer is surrounded by an  “illegal swamp-culture that apparently only Schweighofer doesn’t notice,” says Bogdan Tudor, a lawyer and president of the Nostra Silva (“our forest”) environmental organization.

This  monopolized power held by the Austrians’ has finally begun to unnerve Romanian politicians. Earlier this year, the majority of Romanian MPs  approved a new forestry code that states that a “group of companies is not allowed to process more than 30 percent of the volume from a single species of tree.”

Naturally, the Austrian companies disagreed with the limits of the bill. In a letter to Prime Minister Victor Ponta, Gerald Schweighofer threatened to carry out lawsuits and mass layoffs; stating that the legislation would violate EU laws and the free trade of goods.

Although Ponta’s Social Democrats have not submitted to this threat, the new Romanian conservative president, Klaus Johannis, has agreed that the legislation violates the principles of the country’s own constitution. However, former minister Pana has reaffirmed that the Romanian Constitution clearly states in Article 135, that the state is obliged to protect national resources.

Schweighofer also claims in his letter to Ponta, that the company has created 3,150 jobs in Romania, but, as Pana points out, Romania’s “have lost 50,000 jobs in small and medium-sized companies in the lumber industry.”

The plants ability to sustain life depends on healthy and rich forests. The global issue of deforestation is one of the main causes of climate change. According to Greenpeace 80% of the world’s forests have been degraded or destroyed.

Astonishingly, as of yet, none of these transgressions have damaged Schweighofer’s reputation. Romanians have begun the fight to save these precious forests with protests in the streets and MPs and other officials have drawn up appropriate legislation. It is time for large corporations to stop destroying our planet for power and wealth. For if we do not stand up and protect the forests needed to sustain life on earth, then ultimately it will eventually become our downfall.

This Article (Illegal Logging In Romania: Austrian Lumber Corporations Reap The Benefits) is free and open source. You have permission to republish this article under a Creative Commons license with attribution to the author and AnonHQ.com.