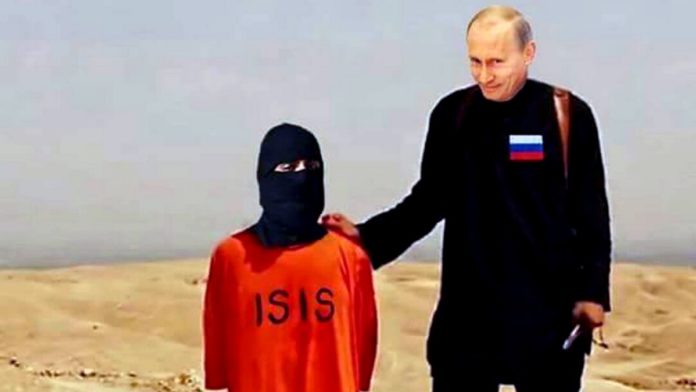 >> CLICK HERE TO JOIN US <<
>> CLICK HERE TO SUPPORT US <<
Syria (RT) — Islamic State militants have lost “most” of their ammunition, heavy vehicles and equipment in Russian airstrikes, the Defense Ministry said Tuesday. At least 86 ISIS targets were hit during 88 sorties in the last 24 hours.

Shortly after hundreds of civilans from various political parties and youth organizations came out onto the streets outside the Russian embassy in the capital of Syria, Damascus, to demonstrate support for Russia’s involvement in the fight against the Islamic State. #SYRIA Russian air strikes resulted in elimination of the most part of #ISIS ammunition, heavy vehicles and equipment

Su-24M bombers also targeted an IS field headquarters near the city of Anadan in the province of Aleppo from which the terrorists coordinated their activities. There was an ammunition depot at the site, the ministry said. One more IS field post was destroyed near the city of al-Bab in Aleppo Province.

#SYRIA The terrorists activated all their logistics net to transport ammo and fuel from #Raqqah province — Минобороны России (@mod_russia) October 13, 2015

A new set of videos was released showing targets hit in Latakia and Hama.

An Su-34 bomber airstrike completely destroyed a bunker with an ammunition depot near Latamna in the province of Hama, the ministry said in a press release.

According to intercepted communications, the militants suffer from shortages of ammunition, small arms and grenade guns. Several commanders allegedly say they will withdraw their units unless their ammunition needs are satisfied.

“Russian airstrikes resulted in the elimination of the majority of ISIS ammunition, heavy vehicles and equipment,” the Defense Ministry tweeted.

Russia launched its anti-IS military operation in Syria on September, 30, at the request of the Syrian government. Western countries have voiced concerns that Russia rather targets moderate opposition in Syria, but Moscow says it is after terrorist groups such as IS and Al-Nusra Front.

“[Western countries] say we are bombing false targets. On Sunday US air forces targeted a power station and a transformer in Aleppo. Why did they do it? Whom did they punish? What was the sense? That is unclear,” Russian President Vladimir Putin said on Tuesday.

Meanwhile, Russia’s Ministry of Defense has prepared an agreement concerning the safety of flights in Syria and sent it to US Secretary of Defense Ashton Carter, who confirmed that talks are being held. However, no agreements have yet been reached, RIA Novosti reported.