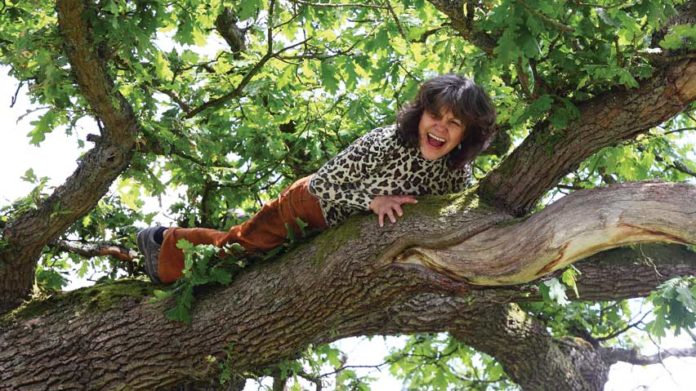 She was 4 when she was kidnapped from her garden in 1954, and abandoned in a Colombian jungle where she was raised by Capuchin monkeys for 5 years, until she was discovered by hunters and sold to a brothel in the city of Cúcuta. She lived as a street urchin enslaved by a mafia family, before being saved by a neighbor and eventually moving to Bradford, Yorkshire.

An incredible, extreme, unbelievable tale or a radical case of adaptation and survival? In December 2012, as part of a new National Geographic documentary Woman Raised by Monkeys, she traveled back to South America in an attempt to uncover her mysterious past. In The Girl With No Name: The Incredible True Story of the Girl Raised by Monkeys she shared her experience with the world; Marina, along with her daughter Vanessa, has pieced together a foggy memoir.

After being dumped into the Colombian rainforest, half-drugged, terrified, and starved, she bumped into a troop of Capuchin monkeys. She ate what they ate and learned to fend for herself, eating berries and roots, nabbing bananas dropped by the monkeys, climbing trees and walking on all fours. Capuchins are well-mannered towards humans, so they eventually accepted Marina into their territory. Though she found a family with the monkeys, she lost the ability to speak, lost all inhibitions, lost any real sense of being human, and replaced the structure of human society with the social mores of her new simian family.

Marina would get frightened by armed hunters who would occasionally visit the jungle. But one fateful day, she pleaded in grunts for them to rescue her, naked and walking like a monkey. They did… and ironically this is where her story became more harrowing. At 10, she was sold to a brothel (below) for a parrot, where she was named Gloria. Forced to clean, she was regularly beaten. Just before she was about to be given to her first man, she escaped. After her escape, she lived on the streets of Cúcuta with other homeless children, and was renamed Pony Malta. She put the skills she had learned in the jungle to good use, and survived as all the homeless children survived.

One day Marina found a family who had agreed to take her on, and renamed her Rosalba. But it turned out that they were notorious criminals, and they enslaved her. She fled with the help of a neighbor, a woman called Maruja and was flown to Bogotá. At 14, she was adopted by Maria, Maruja’s daughter. Marina was freed… and she called herself Luz Marina – Luz, after a Colombian beauty queen.

Her adoptive family in 1977 sent their children to Bradford. Marina followed as their nanny. She met John Chapman at church and they fell in love. Six months later they were married.

However, Marina’s transition into civilized culture wasn’t easy. She focused on becoming normal. She trained as a cook, eventually becoming chef at Bradford’s National Media Museum. She reined in the urge to walk like a monkey. She became a respected member of the church, and a loving mother, forever making sure her children and grandchildren did not go hungry. “When I came out of the jungle, I had to learn how to sit in a chair, how to open doors, sanitation, all the things I’d never done. I’m still really bad in terms of sitting down and behaving like anybody else. I watch people eating their food and I copy them. I felt I’d been a bad person as a child, and that stays with you. Because you were brought up in a brothel house, you feel bad about it. You feel you shouldn’t mention it to anybody. Your family adopt you as a child and you think if you tell them, they will chuck you out. I was frightened people would try to exorcise me because they think you’ve got something vile in your life,” she told The Guardian.

Marina began to understand how her early experiences would go on to shape her. “You do learn a lot of instinct from animals, especially when you have to survive on the streets in a city. When you have to defend yourself, you know how to fight back. Whenever I’ve been attacked, I always hit before they hit me. You become a survivor, you become resilient and hard. I consider myself a really hard person. Tough. I take any problem I’ve got and get on with it, because you just have to carry on to survive,” she added.

Marina and her family stand by her story. The proceeds from the book are being donated to a charity for abandoned children. “We’re just telling our family story, and it doesn’t matter what people think really,” Vanessa said.

Marina Chapman may live a quiet life now, but the story of her childhood is more akin to a wild fairytale – The Huffington Post