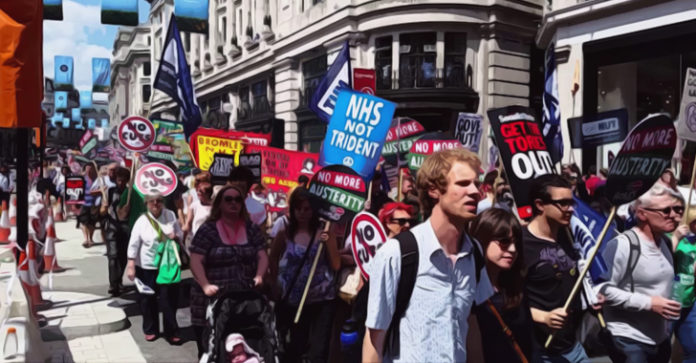 The wave of joyous solidarity at the Greek “No” vote still resounds across the world today, revealing millions who identify with the struggle and have had enough of being bullied and controlled.

Whether it is Euro bullies, other governments or corporations, the sight of a country shaking its fist in a fight for the people while refusing to be blackmailed has brought a spark of much-needed hope worldwide.

Unlike Greece, Britain can always print more money—but deficit obsession, fear-mongering, and austerity fever still rule. As ordinary people suffer increasing hardship, the Tories have made no secret of their plans for another £12 billion of welfare cuts—due to bite harder this week as Chancellor of the Exchequer George Osborne unveils his emergency budget. Over the weekend, more pompous announcements revealed that higher earners will no longer be eligible for “subsidised” social housing and will be required to pay “market rates” instead.

As the the country buckles under the longest continuous decrease in living standards since records began, the Greek vote has inspired thousands to sign a petition overnight that calls for the U.K. to have its own referendum on austerity.

Falling wages and low-paid or zero-hours contracts have caused 51,000 people to be referred to food banks in the first half of the year. As the working poor, sick, and disabled cling to their homes with white knuckles, homeless charities report that 27,640 homeless applications have been made since the start of 2015.

Protests and strikes will take place throughout the U.K. this week as the emergency budget is revealed. London Underground Staff will strike for 24 hours due to plans for the new all-night service, which requires them to work more shifts for no significant extra pay. Some local councils plan to strike and hold demonstrations against the outsourcing of public services, which are widely promoted as the answer to shrinking budgets.

As more disastrous cuts are announced, efforts to build the U.K. anti-austerity movement appear to be stepping up. The full impact of the cuts remains to be seen, but the volume of attendees at June’s central Londondemonstration show that many are not prepared to lie down and accept austerity. Just like the Greeks, ordinary people know they are not the ones responsible for the chaos created by banker bailouts and corrupt governments and are outraged that they are the ones expected to pay for it.