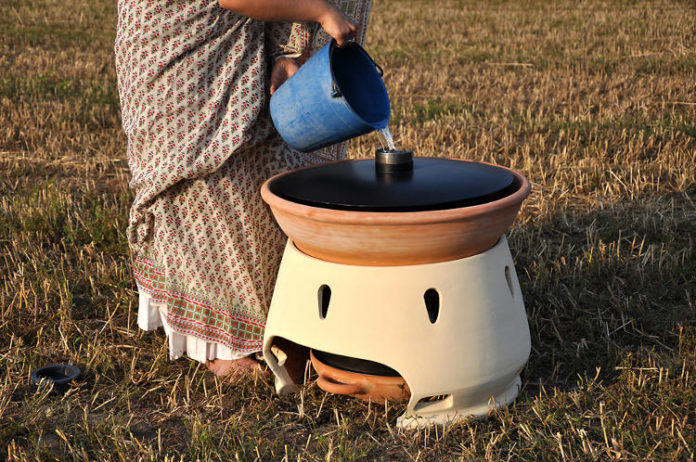 It functions by filling the black boiler with salty sea water in the morning, then tightening the cap. As the temperature and pressure grows, steam is forced downwards through a connection pipe and collects in the lid, which acts as a condenser, turning the steam into fresh water. Once Diamanti established the fundamentals were sound, he experimented with a series of concepts for the aesthetic of the object. “My goal was to design something friendly and recognizable for the users,” he explains. “The process developed quite naturally to determine the current shape; every detail is there for a reason, so the form, as well as production techniques, represent a compromise between technical and traditional.” Primary field studies in sub-Saharan Africa revealed the habit of carrying goods on the head–also a common practice in other areas around the world–and this was integrated into Eliodomestico’s plan. And while solar stills aren’t a totally new concept, Diamanti says it’s rare to find them in a domestic context rather than in missions or hospitals, or as large plants overseen by qualified personnel that serve entire communities. “I tried to make something for a real household that could be operated directly by the families,” he says.


The project recently won a Core77 Design Award for Social Impact; already, Diamanti has received international feedback, and hopes to see locals adapt and modify the design to take advantage of their own readily available materials and native environments. “The idea is that instructions for the project can be delivered to craftsmen” with the help of NGOs, he says, then a micro-credit program could be established to finance small-scale start-ups specializing in production. “So the NGO is the spark, micro-credit is the fuse, the local craftsmen are the bomb!”