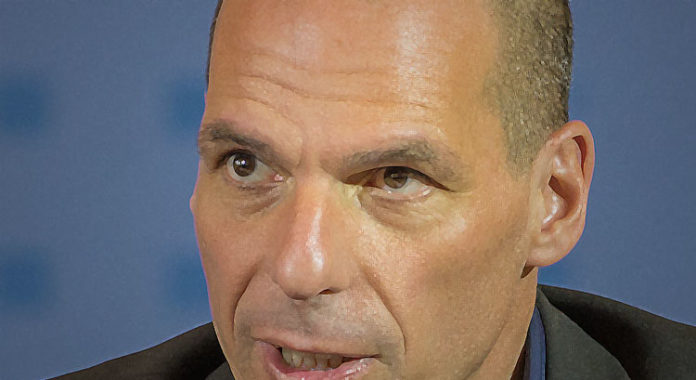 Growth vs Austerity? It’s a no-brainer for a logical guy like Varoufakis.

It’s been a crazy few days for Greece, with the people’s decision to reject further bailouts and austerity measures making history last Sunday (full story here). The hero of the hour is Greece‘s ex-finance minister Yanis Yanoufakis, who was forced to resign after winning the referendum result he had been fighting for these past few months. His reason? Shady, un-named international creditors refuse to negotiate with Greek Prime Minister Tsipras further unless Yanoufakis leaves the party. With his radical suggestions of debt re-structuring and his rejection of the idea that the poorest in society should pay a private debt, Yanoufakis was a thorn in the side of the establishment.

In this RT video clip from a press conference last month, Yanoufakis shows why the people respect him so much. When verbally attacked by a German politician who accuses him of being irresponsible for refusing more bailout cash (to pay back old bailout cash, and so on until infinity), Yanoufakis calmly, patiently and intelligently tells the man why he is absolutely wrong about everything.

THIS is why no country’s citizens should accept bailout money without seriously considering the consequences. Yanoufakis, an economist, manages to explain the reality in a simple and persuasive way. He uses the German politician’s own logic against him and finishes with an emotional call to unite Europe and find a sustainable solution for the future:

“We are Europeans, we should have an alliance based on logic: looking after your taxpayers, looking after my taxpayers. I want [the economy] to grow faster so as to be able to repay you, and that is a project that we should sit down and agree on together if you want your taxpayers to be paid. We are a proud people; we do not like having debts that we don’t repay. But we simply cant find the 312 billion euros that we owe. Help us grow so that we can repay. This is what a union is.”

The audience at the press conference applaud loudly, and Yanoufakis finishes with a bright idea for Europe which until now is nothing more than a crazy left-wing pipe dream. But it makes sense. “You have this magnificent industry,” Yanoufakis tells the German minister. “And you should be proud of that. Germany is always going to have a surplus [of trade]. Your surpluses could fund investment projects in Greece in Italy or wherever, from which the Germans benefit, which are sustainable, and don’t create bubbles which then burst creating problems for your taxpayers, my taxpayers and the whole of Europe. We are a union of social values. we should be in this together.”

There is very little to argue with there. This clip is a great one to share with people who just don’t get the Greek government’s position: it’s not about running away from their debts, it’s about dealing with the debt in a way that causes the least amount of suffering and the optimum economic growth for the country. Like other maverick economists Paul Krugman and Joseph Stiglitz, Yanoufakis’s economic policies make perfect sense- unlike those of the crooks and robbers running our global financial institutions.