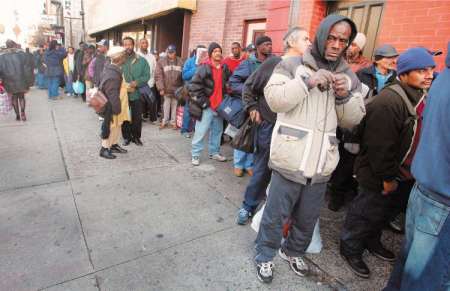 Back in 2012, during the last U.S. presidential election, Aljazeera reported on the presidential candidate’s – then President Barack Obama and Mitt Romney – avoidance of the topic of poverty in America, and with the exception of Bernie Sanders, we saw this again during the 2016 presidential election. A 2016 report from Alternet brings to attention how during three early debates,  “ISIS” and “terrorism” were mentioned 21 times, yet poverty wasn’t mentioned once. The fact is, with approximately 45 million Americans still living in poverty in the United States, it remains one of the most pressing issues in the country, and is still largely ignored by the corporate media.

Once his campaign took off, Donald Trump appealed to the people with talks of saving Social Security and Medicare, yet he has since surrounded himself by those who wish to cut both. He spoke of “drain[ing] the swamp,” and has since assembled an administration worth as much as $35B. We still have yet to see what will happen under a Trump presidency, but so far, the possible outcomes don’t look promising. Now that 2017 is here, let’s take a closer look back at poverty in America in 2016:

According to Statista, Americans feel the economy is the most important problem facing the United States, followed by unemployment/jobs and dissatisfaction with the government (see chart below), and in fact, while the U.S. economy faired a bit better than thought in 2016, it wasn’t nearly enough to make a substantial impact. Reports are now praising Obama for closing out his term with a 4.7% unemployment rate, however this is only down by .3% since December 2015, and most reports fail to mention these numbers can change substantially from month to month – we were at 4.7% in May 2016 as well, and then in June, unemployment was back to 4.9%.

Wages (on average) reportedly increased in the U.S. during 2016, however if you want one of the highest paying jobs, you’ll have to become either a physician, lawyer, research & development manager, software development manager, pharmacy manager, strategy manager, or software architect, just to name a few (see here for a list of the top 25 highest paying jobs in the U.S. as of 2016). Included among the professions that saw the highest growth in pay during 2016 were systems analysts, financial analysts, certified nursing assistants, customer service managers, baristas, pharmacy technicians, sales consultants, security officers, and business systems analysts (source). Needless to say, a lot of Americans are being left behind. Unless you’re a barista.

As of September 2016 there were 1,750,000 homeless people in the United States, 40% of which are veterans. Of the women who are homeless, 40% are unaccompanied/have no partner, and 25% claim to have been sexually abused in the last year (see here for a list of additional statistics on homelessness in America). On the issue of hunger, 31 million Americans now live in hunger, or are on the edge of hunger.

Year after year, reports scold the corporate media for their coverage of poverty in America, or more appropriately, lack thereof, and as usual, nothing ever changes. As the saying goes though, “follow the money,” and that seems to be precisely what the corporate media intends to do. In a nation that spends roughly $600B a year on military expenditures, does it really come as a surprise that the media would rather shove the so-called “war on terror” down your throat than address the poverty it’s causing back home?

This article (Poverty in America Once Again Ignored in 2016) is a free and open source. You have permission to republish this article under a Creative Commons license with attribution to the author and AnonHQ.com.