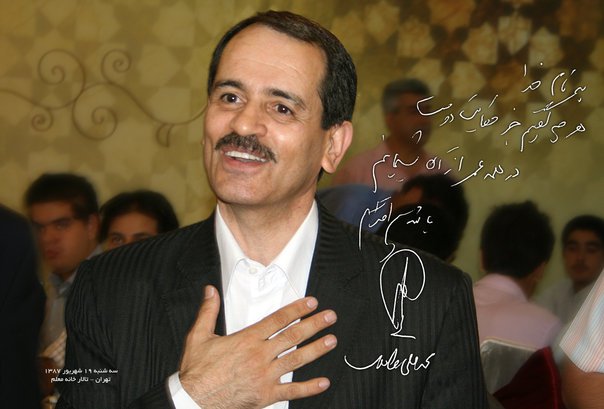 Mohammad Ali Taheri is a Persian scholar and a theorist in the field of human sciences. He is also the inventor of two “medical” disciplines that you’ve probably never heard of: Faradarmani and Psymentology. His works appears to have been acknowledged worldwide, if you believe the boisterous claims of the many websites that preach his strange philosophy, and accredited in various international conferences such as the Brussels Eureka 2010 and 2011, Korea Cyber Genius Inventor Fair 2010. He was awarded Officer Medal for his scientific theories and research.

From a website that is based on his practices:
Faradarmani & Psymentology are types of Complementary and Alternative Medicine (CAM), a branch of Interuniversalism, founded by Dr. Mohammad Ali Taheri in Iran. These CAM are based on a viewpoint called Interuniversalism. According to this approach, human is not only a pile of flesh and bones but as vast and limitless as the universe. additional to physical components, which is considered as hardware part of human, he has countless software programs which can run this physic.

In this mystic school, therapy is applied by taking the individual’s entire existence into consideration and while the person is connected to the Interuniversal Consciousness Network, they are simultaneously scanned by the consciousness which will identify problems according to its own expedience, and begin to remove these defects during the process of therapy.

Therefore, from this viewpoint, we can cure all kinds of diseases by using the Interuniversal Consciousness Network. The Fara-Therapist is not allowed to consider any kind of illness as ‘incurable’, because for the cosmic intelligence, all kinds of cures and repairs are possible.

I’m not a particularly spiritual person, but from what I can tell, this sounds like bits of spiritualism, mixed with generous servings of hokum, and sprinkled with unverifiable claims of curing the incurable. Nonetheless, the man does not deserve execution for being a quack. Anything that defies traditional Islamic teachings is against the law in countries where a religious law holds sway, such as Iran and Saudi Arabia, and this man’s trial speaks of larger issues…

Regardless of my opinions, it would seem that there are several testimonials of the effectiveness of this form of spiritual-medicine-thingie… Without providing much in the way of tangible details of course, the testimonials go into great detail regarding his imprisonment, which is rather strange seeing as they do not seem much concerned about explaining how or what specific teachings had benefited them to begin with.

I digress. On the 18th of April 2010, Mohammad Ali Taheri was imprisoned for 66 days without being given a chance to contact his family or a lawyer. He was imprisoned without any clear charges. He was released at the end of June, 2010. Taheri was arrested again in 4 May 2011, and again he was not allowed to consult a lawyer, access to a fair trial, right to defend himself publicly and contacting his loved ones. This time he was charged, however: “entering to the forbidden intellectual field” and “acting against national security”. After 3 court appearances, on 30 October 2011 the Tehran Revolutionary Court sentenced him to five years in prison for “blasphemy”, 74 lashes and he was fined a whopping $1,000,000 for “interfering in medical science” and “distribution of audio-visual products and use of academic title”.

Even after his verdict, Taheri was not transferred to the general ward, and instead he has spent the entirety of his term so far, 3.5-years, in solitary confinement. His case is still not closed, and Amnesty International claims that the Iranian government is trying to find any excuse it can to execute him, despite not being charged with an executable crime; the Iranian government also accuses him of “Corruption on Earth”, an Islamic charge issued by religious leaders.

Taheri’s case is well-known at the United Nations and Amnesty International. His case is also being monitored by “Mr. Ahmed Shaheed”, the UN special rapporteur on human rights in Iran, who says this case is a direct violation of human rights in the release of a report titled “Report of the Special Rapporteur on the situation of human rights in the Islamic Republic of Iran, by Human Rights Council, Section C, Page 10”. Amnesty International has also issued an urgent letter, calling for action to be taken regarding Taheri’s case, highlighting the violation of his rights.

Taheri’s students created a lengthy documentary film, the “Road to Freedom” in order to make the world aware of the apparent human rights violation in his case. Thy hope to gain the support of human rights activists who are willing to protest for his freedom, before court deliberations come to an end in February 2015.

The video that his supporters had made:

It should be noted that the video appears to be surprisingly well-edited… Which also speaks of Iran itself, and the fact that its people are both the some of the most educated in the Middle East, and the most free. Perhaps a bit of context will explain the contradiction that is now surfacing.

Although they currently live under the thumb of a religious head, Iran was once a democracy and had all the trappings of one until America supported a  pro-American puppet-dictator known as the Shah. The Ayatollah was put in place after the Iranian people deposed the Shah, but despite being authoritarian it is still more intent on ensuring that its women achieve a good standard of education as compared to many of its neighbors and rivals. Saudi Arabia comes to mind. It still does not even allow women to drive,go anywhere without a male chaperon, vote in elections, compete freely in sports or even go for a swim. Public beheadings, floggings, torture and arbitrary arrests and detentions are some of the facts of that nation according to Amnesty International.

This does not excuse the actions of the regime; I believe that it is important that the strange man be allowed to go free, but as with anything, protesting for this man’s freedom should be done while one is conscious of the wider picture of the horrors being pursued in the region.

To solve one small humanitarian problem, and then deem the job done, is the reason why our mass media loves distracting us with hundreds of tiny problems…. there was a drowning man 100 feet from the shore. A conservative threw him a rope 75 feet long and asked him to swim the remaining distance to the rope. A liberal threw him a rope 100 feet long and promptly dropped his end, off to perform another good deed. Throw the man rope he can reach, and remember that the issue isn’t settled till you’ve pulled him to shore.