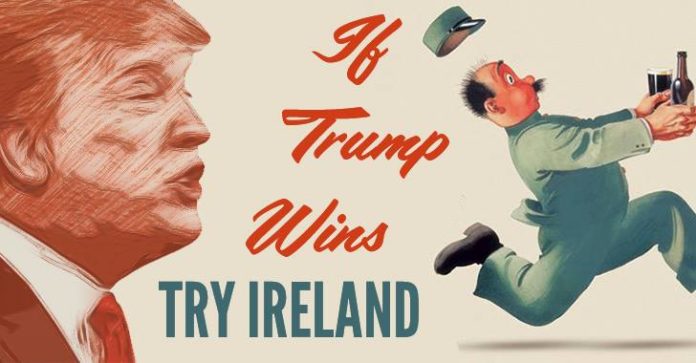 Inishturk, Ireland — A radio DJ from Canada’s Cape Breton Island first introduced the idea of havens for Americans seeking escape from a Donald Trump presidency — but now Ireland is joining in with its own offer for possible future expats.

Inishturk, a remote Irish Isle situated nine miles off County Mayo, has decided to court the potentially disillusioned segment of the United States populace with an open-armed offer to provide a safe place to live if the idea of a Trump presidency is too much to bear.

In the midst of a problematic population decline, Inishturk wants to ensure a thriving future, which community leaders feel could be accomplished by becoming a refuge for those escaping the tumultuous U.S. political system.

“I’ve heard there are quite a few people in America looking to move to Ireland and other countries if Donald Trump becomes president. I’d like them to know that we’d love to see them consider moving over here,” explained Mary Heanue, Inishturk’s development officer, as IrishCentral reported.

Inishturk has a vested interest in attracting new residents to become part of its now-tiny community.

“Our big concern is employment and trying to encourage families to move over here because the population is declining,” said Heanue. “The island featured on an Irish TV documentary last year which gave us great publicity and a good few extra bookings. But we ended up having a terrible summer and a lot of people canceled.”

An influx of people would be more than welcome considering just 58 permanent residents now reside on the remote Irish outpost — and with only three students attending the island’s primary school, phenomenal student-teacher ratios could easily be a draw.

“They’d be given a huge welcome and they’d find this is a fantastic place to live and to bring up children,” Heanue continued. “Their kids would probably get the best education anywhere in the country too, because the teacher to pupil ratio is nearly one-on-one.”

Inishturk isn’t all rainbows, blue skies, and unicorns, however. As Heanue cautioned, “Although winters can be hard and it’s the kind of life that wouldn’t necessarily suit everyone, they’d find it very peaceful here and they’d soon find out there’s nowhere as nice in the world on a summer’s day than here.”

Several Twitter users posted enticing pictures of the skies as seen from the Irish island, and IrishCentralpublished a “guide on moving to Ireland in case Donald Trump is elected,” detailing the steps necessary for obtaining visas or citizenship.

Looking out towards Inishturk tonight… good to be back in Mayo… pic.twitter.com/P6qO9wTuTs

It is worth noting Inishturk’s offer likely isn’t limited to Trump escapees — the island’s desire for new residents means it would happily accommodate those seeking sanctuary from a Hillary Clinton-headed United States, as well.

This article (This Irish Isle Will Greet Those Fleeing Trump With a Hug and a Pint) is free and open source. You have permission to republish this article under a Creative Commons license with attribution to Claire Bernishand theAntiMedia.org. Anti-Media Radio airs weeknights at 11pm Eastern/8pm Pacific. If you spot a typo, email[email protected].