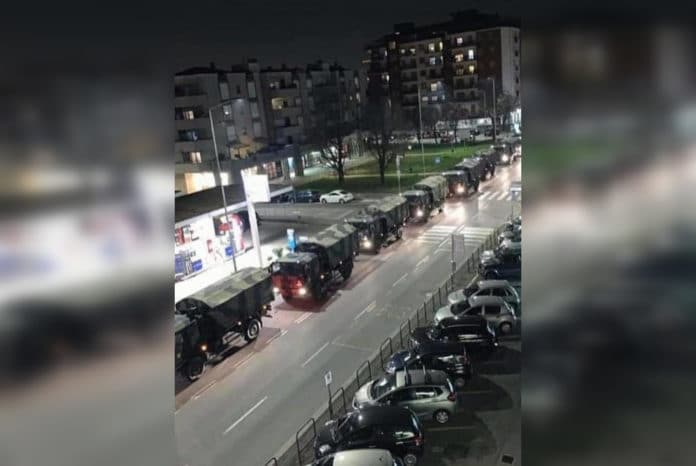 Italy: An image is currently being shared on social media showing numerous military vehicles, with the accompanying text that they would be needed to remove corpses from the Italian city of Bergamo, as the local funeral parlors could no longer keep up with the dead.

The picture taken in the center of Bergamo shows a long column of military vehicles at Borgo Palazzo, which is a few hundred meters away from the local cemetery. The army vehicles were made available by the Italian military to carry coffins to the crematoriums in other regions.

The reason for this is the fact that the morgue in Bergamo has been exhausted for days. This also applies to the city’s only crematorium furnace, which currently runs 24 hours a day. The Bergamo region is one of the most affected areas of the Covid – 19 virus and both the cemetery and the funeral home have not been accessible for a long time.

In order to relieve the mortuary of the cemetery, the military vehicles shown above were provided to transport the coffins to other regions.

The city of Bergamo is located northeast of Milan and, like the entire region of Lombardy, belongs to the exclusion zone of northern Italy. This was set up by the Italian government in order to contain the corona virus there as quickly as possible. According to calculations by the news portal n-tv, Italy will overtake China today as the country with the most deaths from the Corona Virus. For this reason, Prime Minister Conte had already announced that the curfew, which runs until April 3, would very likely have to be extended in order to cope with the crisis.

Summarized:
The shared sharepic is real. These are Italian military transporters, which relieve the local morgue or cemetery and transport the coffins in morgues or crematoriums from the surrounding area. The picture taken is from Bergamo, a city in Lombardy, which is one of the regions most affected by Covid-19 in Italy.