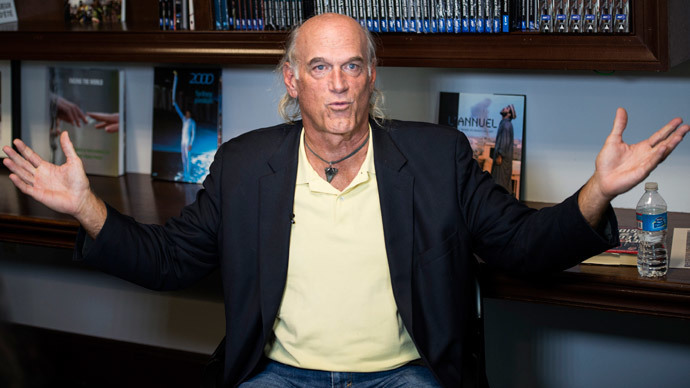 Jesse Ventura. Former Marine. Former professional wrestler. Former governor of Minnesota. Former bane of tall-tale-telling bloodthirsty snipers (come now, there’s even has a picture taken on the day of the altercation which shows Jesse completely unharmed. And Kyle has told numerous unverifiable tall tales, such as executing looters in the aftermath of Hurricane Katrina. You would think that somebody would have noticed if a bunch of bullet-ridden bodies started floating around. Had he been telling the truth, Kyle would have been arrested for admitting to several murders).

He has worn many hats in his life, and now he steps into the ring with politicians, journalists and opinion makers for lively debates on his new weekly current affairs program on RT America.

Ventura said that the program will center around “uncensored discussions on the critical issues facing America today.”

“Independent viewpoints such as my own are few and far between,” Ventura said in a statement. “I’m thrilled that my show will be aired on RT America, as well as continuing on Ora TV as my digital home.”

“‘Off the Grid’” will become yet another platform for independent and alternative viewpoints – something that made our channel popular with American audiences from the start,” said Margarita Simonyan, RT editor in chief.

Ventura may be 63 years old, but he shows no sign of slowing down; he has hosted nearly 200 episodes of “Off the Grid” since the show’s kick-off, and prior to that starred for three seasons in the truTV series, “Conspiracy Theory with Jesse Ventura.”

His rise to fame began way back in the 1970s, when Ventura began his career with the World Wrestling Federation. He later starred in the 1987 sci-fi cinema classic “Predator” as Blain and has since written several books, such as “American Conspiracies: Lies, Lies, and More Dirty Lies That the Government Tells Us.”

Ventura also served as the governor of Minnesota between 1999 and 2003, after serving as mayor of Brooklyn Park.

RT said that “Off the Grid” will continue to be filmed in “a secret location,” but has also indicated that its host may appear at the network’s studios for special coverage.

After the launch of “Off the Grid” on Ora last year, Ventura said that, in an interview with RT, he had begun filming the show in Mexico, “so that the drones can’t find me.”

“I view the United States, today, much like East Berlin. And I’m off the grid. I’ve tried for 20 years to warn the country about the Democrats and Republicans, and nobody’s listening,” he said.

Starting April 3, “Off the Grid” will air Fridays at 6pm EST on RT, the exclusive worldwide broadcaster for the show. Available online at RT’s website, as well as Ora.TV.

Jesse Ventura also hopes to run as an independent candidate in one of the coming elections There are few men willing to stake their reputation on telling the truth; and if the system is to become more transparent, then Americans will have to vote for men like him.