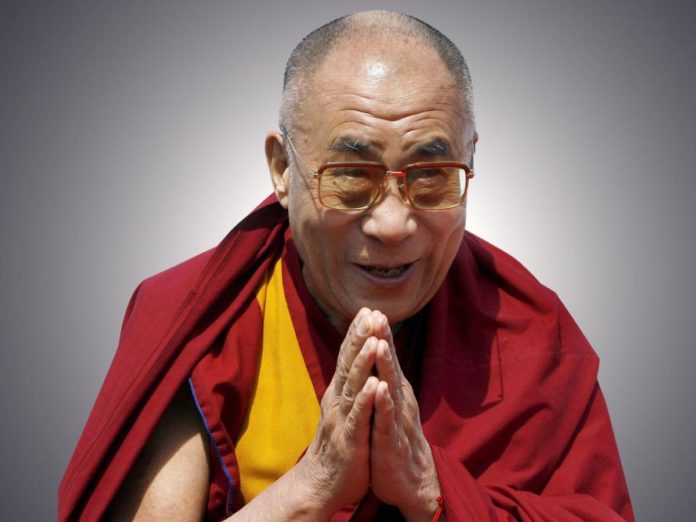 What comes to mind when you hear the words “Dalai Lama”?

a) Harmless, affable, caring, worldly, Nobel Peace Prize-winning sage who would not hurt a fly.

b) Some old dude in an orange robe, probably smokes too much pot.

c) Meat-eating, child-abuse-advocating, nepotistic CIA super-spy, earning hundreds of thousands of dollars for his efforts at reclaiming power in Tibet, who had asked for weapons to be flown into the region causing massive loss of (Tibetan) life.

As the patron deity of Buddhism, the Dalai Lama is also a representative of the occurrences at his temples. It would be like the Pope trying to tell you that pedophile priests were a part and parcel of Catholicism and that there was really nothing he could do or say about it.

Details.com speaks of the experiences of a boy….

Last September, after a teaching session in Vancouver, someone in the audience asked Kalu about sexual abuse in the monasteries. He replied that he was sensitive to it because he had been molested.

The boy’s name is Kalu Rinpoche, a reincarnated thingie of some long-dead person (aka randomly selected baby). He created a video titled “Confessions of Kalu Rinpoche,” he says that he was molested by elder monks…”sexually abused by elder monks,” and when he was 18 his tutor in the monastery threatened him at knifepoint. “It’s all about money, power, controlling. . . . And then I became a drug addict because of all this misunderstanding and I went crazy.”

A gang of older monks who would visit his room each week…..This was hard-core sex, he says, including penetration. “Most of the time, they just came alone,” he says. “They just banged the door harder, and I had to open. I knew what was going to happen, and after that you become more used to it.” It wasn’t until Kalu returned to the monastery after his three-year retreat that he realized how wrong this practice was. By then the cycle had begun again on a younger generation of victims, he says. Kalu’s claims of sexual abuse mirror those of Lodoe Senge, an ex-monk and 23-year-old tulku who now lives in Queens, New York. “When I saw the video,” Senge says of Kalu’s confessions, “I thought, ‘Shit, this guy has the balls to talk about it when I didn’t even have the courage to tell my girlfriend.'” Senge was abused, he says, as a 5-year-old by his own tutor, a man in his late twenties, at a monastery in India.

Another interesting post was written by the Huffington Post. It is particularly notable because only the cached version is available.

It speaks of the experiences of a young girl, she too had been raped by monks. More surprising was the reaction of the authorities of the Tibetan community:

As shocking as the alleged crime was the revelation that the Mundgod camp officer and settlement officer had encouraged the father of the child not to pursue criminal charges against the men. Why? Out of fear of shaming HH the Dalai Lama and the Tibetan people.

Widespread child abuse and even rape at his temples, yet he has very little to say on the matter…. Yet another case of See No Evil, Hear No Evil, Speak No Evil.

Australian paper The Age wrote a telling article that details the Dalai Lama’s secret life, long admitted by the CIA itself.

The government set up in exile in India and, at least until the 1970s, received $US1.7 million a year from the CIA.

The money was to pay for guerilla operations against the Chinese, notwithstanding the Dalai Lama’s public stance in support of non-violence, for which he was awarded the Nobel Peace Prize in 1989.

Yet another Nobel Peace Prize winner who advocates violence? A drone-striking president and a weapon-buying monk, clearly the Nobel committee isn’t just picking candidates based on how much pressure the political establishment was applying to it….

the Dalai Lama has been remarkably nepotistic, appointing members of his family to many positions of prominence. In recent years, three of the six members of the Kashag, or cabinet, the highest executive branch of the Tibetan government-in-exile, have been close relatives of the Dalai Lama. An older brother served as chairman of the Kashag and as the minister of security. He also headed the CIA-backed Tibetan contra movement in the 1960s.

A sister-in-law served as head of the government-in-exile’s planning council and its Department of Health.

A younger sister served as health and education minister and her husband served as head of the government-in-exile’s Department of Information and International Relations.

So, his “government in exile” is basically his immediate family? Sounds real legitimate, Mr Lama. It gets better:

Contrary to widespread belief, he is not a vegetarian. He eats meat. He has done so (he claims) on a doctor’s advice following liver complications from hepatitis. I have checked with several doctors but none agrees that meat consumption is necessary or even desirable for a damaged liver.

You want to know his real reason for eating meat? It tastes good. Who cares if, according to Buddhism, this piece of roast beef was the reincarnated remains of one’s own grandpa? Does he even believe in the practices he is espousing?

The CIA wasn’t just his chief financier, it had trained the few men willing to fight for him as well according to a Newsweek article:

Help was on the way. In 1958 more than 30 Tibetans began training secretly at Camp Hale, not far from Leadville, Colorado. Here about 300 Tibetans in all–assigned names like “Jack,” “Rocky” and “Martin”–were schooled in the black arts of covert warfare, from spy photography and sabotage to Morse code and mine-laying. “We had great expectations when we went to America; we thought perhaps they would even give us an atom bomb to take back with us,” said one trainee, Tenzin Tsultrim.

The final nail in the coffin is a letter penned by either his “Holiness” or his entourage, sent to the CIA and revealed by a FOIA request.

It states that “Chinese Communists are firing about 2000 artillery shells per day. They have fired big guns and done very bad damage… Please send us weapons for 30,000 men by airplane”

To be fair, Mr Lama claims to be unaware of any of the CIA shenanigans until much later. Alas, words are wind and facts remain facts. After all, it is the easiest thing in the world to be a vegetarian pacifist… As long as you get to eat meat and wage war that is.